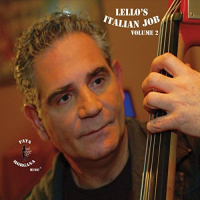 Italian-born bassist Lello Molinari emigrated to the US in the 1980s and is an established part of the Boston jazz scene and a member of the faculty at the Berklee School of Music. In 2016 he released an album reworking the various musics of his homeland into modern jazz and he continues that on this CD.

Molinari draws from Italian folk melodies and pop songs as well as opera here, putting them in new settings ranging from lush exotica to straight-ahead jazz and burning jazz-rock. On one hand there is the heads-down, no nonsense 4/4 groove of the instantly recognizable "Jazz Tarantella" that features elastic solos by both Molinari and saxophonist Dino Govoni. On the other, there are stately, romantic pieces like "Intermezzo Sinfonico," from the opera Cavalleria Rusticana, given a solemn reading by Govoni's EWI synthesizer and Molinari's processed bass, the romantic acoustic guitar and bass treatment of "Anema E Core" and the wistful, flute-led balladry of "Tu Si Na Cosa Grande."

Several tracks combine the two approaches, starting out quiet then getting loud. "Torna A Surrineto," better known as "Come Back To Sorrento," begins with a New Age-like blend of EWI and cello. Then Govoni's tenor starts steamrolling through the music like Sonny Rollins. "I Pini Di Roma" has a placid surface concocted by soprano sax, cello and acoustic guitar before Molinari's heavy-stepping bass signals a change to more forceful sax playing and cranked up rock guitar from Sal DiFusco, who also brings heavy noise to a jazz fusion take on "O'Sarracino" and the jubilant dancing of "Tra Veglia E Sonno."

"'Na Tazzulella 'E Cafe'" gets a funky New Orleans vibe with a tricky second line rhythm, sassy soprano sax and squelchy bass noises from Molinari and there is even a bit of abstract improvisation on "Lidio Napoletano," with moaning tenor, battering bass and ticking cymbals that eventually resolve into flying, up-tempo jazz.

Molinari is very eclectic in his approaches to the material here and that works well for him. He comes up with revelatory new slants on older material helped immeasurably by having strong players like DiFusco and Govoni in his corner. This is an excellent attempt at bringing the old world's music into the new.