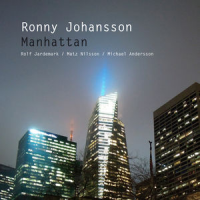 Manhattan, Swedish-born pianist Ronny Johansson's thirteenth album as a leader, is being reviewed on a Friday, the thirteenth (a rather odd coincidence but one that in no way impairs its worth). The album also marks Johansson's seventy-fifth birthday. In honor of the occasion he abandoned his usual trio format in favor of a quartet, adding Rolf Jardemark's clear-voiced guitar (on five tracks) to Matz Nilsson's resonant bass and Michael Anderson's unwavering drums (and percussion). None of them is a member of Johansson's regular working trio.

The title, Johansson says, "grew out of a wish to celebrate [his] birthday with a recording in a new setting." That new setting, as it turns out, was Nilento Studios in Gothenburg, Sweden, where Manhattan was recorded, mixed and mastered. More than a stone's throw from the Big Apple, it's true, but at least it wasn't Uppsala, where Johansson was born and raised. Even though he has toured widely, Johansson is someone about whom you probably know little but should know much more. At the keyboard, he's a lyrical post-bopper along the lines of Hank Jones, Barry Harris, Kenny Barron or Tommy Flanagan, all the while adding a few tasteful maneuvers of his own to help spice up the clambake.

Besides "Manhattan," Johansson pays homage to some other favored migratory haunts, opening with the easy-walking "Ginza" (for Japan, where he has recorded half a dozen CDs) and including the rhythmic "Cote d'Azur," minor-key "Berlin" and groove-laden "Copenhagen (Blues)." Johansson composed and arranged every number, the others of which are the meditative "Gratitude" (for solo piano), vibrant "Wonderland," free and easy "Kind of Blues" and playful "In Blue." Throughout, Johansson plays with the sort of creativity and assurance that one would expect from a musician and educator who made his debut with the legendary Eric Dolphy in 1961 and taught for almost forty years at the Gothenburg University School of Music before retiring in 2009.

While the trio works well together (swinging lustily on "Manhattan," for example), it's good to hear Jardemark's guitar whenever it is interwoven to modulate the tone and temper. Whatever its makeup, however, Johansson's group is well worth checking out for its high-grade rapport, elegance and artistry.