By MARK CORROTO
September 25, 2009
Sign in to view read count 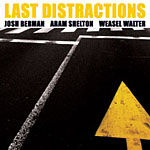 Last Distractions is a highly ambitious project, undertaken with just two horns and a drummer—three horns, actually, as reedist Aram Shelton plays two different ones. This trio of Shelton, cornetist Josh Berman and drummer Weasel Walter has set its sights on a determined and inspiring set of improvised music.

The Chicago jazz scene is the inspiration for this trio, as all three made their names in the new milieu of jazz that the Windy City spawned in the 1990s. Walter played with The Flying Luttenbachers and continues with bands such as Burmese, XBXRX, and his namesake quartet. Berman and Shelton collaborate in bands Rolldown and Keefe Jackson's Fast Citizens. Berman is also known for his work in the Lucky Sevens and Chicago Luzern Exchange, and for his superb Old Idea (Delmark, 2009). Shelton plays in the underrated Dragons 1976 (with Jason Ajemian and John Purvis), though he has relocated to the West Coast to study electro-acoustic music.

Last Distractions, recorded in one day, exhibits the band's tendencies toward an investigation and trial approach to sound. They toss sounds together, mixing them between the harsh and the dulcet, the chattering and the hushed, and even the tranquil and the disturbed. The players use multiple approaches; Shelton's soprano hovers between Steve Lacy and Evan Parker (good company for his first soprano recording). "Bandwagon" features Walter's choppy pulse challenging his partners, as Berman responds with crunchy notes à la Don Cherry-meets-Roy Campbell before the piece ends in quiet, minimalist reflection.

Shelton's bass clarinet work deserves special attention; both brash and nuanced. Invoking the music of Eric Dolphy? Certainly; but Shelton, with Walter's woolly and wild drumming, takes Dolphy to a new planet. In fact, Shelton travels to a galaxy of puzzling endgames that sort sounds into a jigsaw of styles, energies and perspectives.