By NENAD GEORGIEVSKI
January 14, 2018
Sign in to view read count 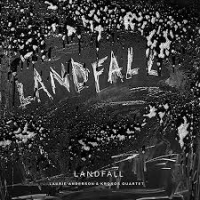 Laurie Anderson has always been many things to many people: an enigmatic singer, an underrated visionary, sonic adventurer, composer, a charming storyteller, and so on. Blessed with a fertile imagination, a gift for vivid and enchanting storytelling and drama, compositional prowess, during her expansive five-decade career, she has released several adventurous albums that have showcased her determination to push the creative envelope. Anderson's diversity and flexibility have enabled her to seamlessly hop across genres, styles, times and context. She is at home in the realm of a broad palette of types of music and over the years she has created a kind of musical drama that is uniquely her own. In a way, her stature and music epitomize a certain New York sound.

Over the years she has benefited from many remarkable encounters and collaborations that have helped her career progress from strength to strength. First premiered live in 2013, Landfall is the first collaboration with the renowned Kronos Quartet, a string quartet famed for its constant pushing forward of musical boundaries. During its 50 years of existence, Kronos Quartet has blurred the boundaries between the traditional and the progressive and the rule breaking has became its modus operandi. This quartet has collaborated with a kaleidoscopic cast of artists from a wider net of genres and epochs from all corners of the globe in order to further the scope of new music. Having come from the avant-garde realms it is a wonder why haven't they collaborated earlier.

The record's narrative was inspired by the epic storm Sandy which was the deadliest and most destructive hurricane of the 2012 Atlantic hurricane season and Anderson's experience with the storm. At the same time, it's a lament and a wrath at the storm and the damage it has caused. At the time, when the storm hit NY it flooded parts of the city including Anderson's Lower Manhattan basement that was full of old equipment, memorabilia, and stage props.

Landfall is a beautiful and sublime work in both intent and depth of material. It uses seemingly simple, haunting sketches of instrumental poetry that explore a diverse palette of sounds and moods that gradually and minimally blossom both emotionally and harmonically over the course of 30 compositions. It's also an ambitious work that unifies these two distinct and towering avant-garde institutions, classical and ambient elements, acoustic and electric instruments into a singular statement. These 30 emotionally mercurial vignettes draw from equally broad sources and as a result, the music they create draws both from classical and ambient music. There are moments where it's neither of those by conventional definition, but it liberally blends the aesthetic choices from both. But together, the effect is both moody and evocative.

Anderson's prolific writing for string quartet and electronics beautifully unite throughout these 30 gems. The score is built on small musical motifs and none of the tracks surpasses 2 minutes in length. The use of subtle electronics and treatments, all in combination with Anderson's hypnotic voice, add a more abstract sensibility to the album. In the spoken texts she tells hypnotic stories about a rising river, water-logged pianos, disappearing animal species or Dutch karaoke bars all spiked with her unobtrusive sense of humor. These stream of consciousness-like spoken words feel like excerpts from a diary notes picked up at random and adding a quiet sense of drama to the overall music.

There is an elegiac quality to it and that contributes to the overall feel of listening to a soundtrack for a nonexistent film. The sequencing of the compositions is as important as the music itself and contributes to its cinematic feel. There is a nice flow where a larger arc is created that leads to strange and unusual places that, in a dreamlike way, feel beautiful and strangely familiar. Most of this seems like a music of somber quietude, but it definitively commands attention. It's a mosaic of brief but beautiful tunes where each manages to capture the strangeness and the magic of Anderson's vision of the post-world. This meeting between Kronos Quartet and Laurie Anderson has yielded music that is both beautiful and haunting, and as a result Landfall ranks among Anderson's most eclectic and emotional work in her oeuvre.

CNN Predicts a Monster Storm; Wind Whistles Through the Dark City; The Water Rises; Our Street Is a Black River; Galaxies; Darkness Falls; Dreams; Dreams Translated; The Dark Side; Built You a Mountain; The Electricity Goes out and We Move to a Hotel; We Learn to Speak yet Another Language; Dawn of the World; The Wind Lifted the Boats and Left Them on the Highway; It Twisted the Street Signs; Then It Receded; The Nineteen Stars of Heaven; Nothing Left but Their Names; All the Extinct Animals; Galaxies II; Never What You Think It Will Be; Thunder Continues in the Aftermath; We Blame Each Other for Losing the Way; Another Long Evening; Riding Bicycles Through the Muddy Streets; Helicopters Hang Over Downtown; We Head Out; Everything Is Floating; Gongs and Bells Sing; Old Motors and Helicopters