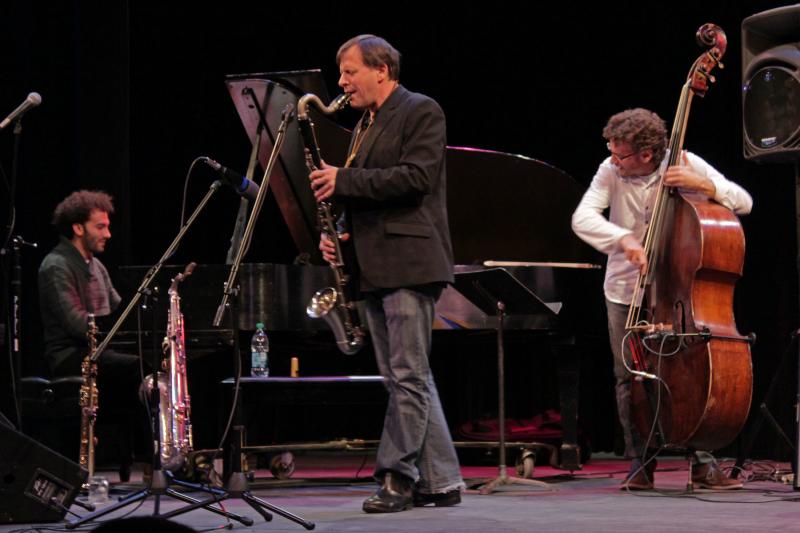 BY MATT MARSHALL
March 3, 2013
Sign in to view read count

Scanning the list of guest artists who have appeared at the Lakeland Jazz Festival since its inception in 1973 reveals a history of acts with connections to the Northeast Ohio/Western Pennsylvania/Western New York area, with an internationally recognized name—Clark Terry, Donald Byrd, Kenny Burrell, Phil Woods—popping up every fifth year or so.

Always the focus has been on fostering an educational environment, providing a venue for local high-school and junior-high musicians to play, and instilling a love of jazz music in younger generations. That emphasis was no different at the 41st offing of the weekend festival, with full days on Friday and Saturday slated for student performance and adjudication. But with Saturday night headliner Chris Potter, touring in support of his recently released album, Sirens (ECM, 2013), and the highly sought-after drummer/percussionist Jamey Haddad heading up a trio on Friday night plus two local big bands—the Lakeland Civic Jazz Orchestra and the Cleveland State University Jazz ensemble, playing on Sunday afternoon—Lakeland Community College staged one of its strongest programs ever for the general, jazz-listening public.

For Friday night's set, Haddad, who is perhaps best known for his work over many years with Paul Simon's band, cobbled together a trio featuring pianist Leo Blanco, with whom the drummer has played off and on for 15 years, and bassist Roberto Occhipinti. Blanco and Occhipinti hadn't even met till earlier in the week, but it didn't show. The trio, focusing on compositions by Blanco, danced as comfortable partners, weaving in and out of the shifting melodies and rhythms of a Latin-tinged music sprung largely from Blanco's Venezuelan roots. Fans in Northeast Ohio are familiar with seeing Haddad in the percussionist role, augmenting various groups with his seemingly unmatched array of exotic percussion instruments, culled from the four corners of the globe. So it was nice to see him behind the kit for a change in a traditional trio setting, fashioning a torrent of tightly knit, propulsive rhythmic patterns, accented by the not infrequent thunderclap. Of course, he made use of the other tools in his treasure trove as well, including stints on the djembe, box drum, various rattles and shakes, and a thick, tambourine-like instrument he praised for offering him Asian, African and Brazilian rhythms in one, convenient handheld unit—"I never leave home without it," he assured the audience. 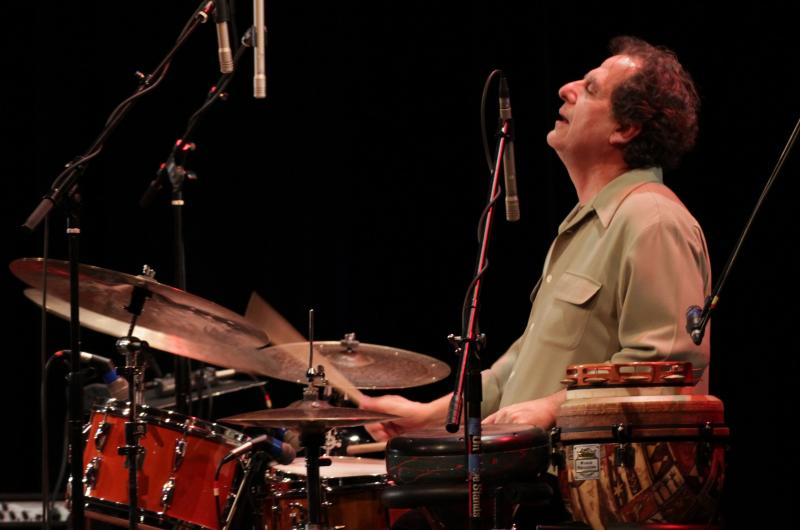 Blanco opened the set by plucking at the strings inside his piano, but soon sat down and took up the jumping bolero melodies that were at the heart of most of his playing throughout the evening. Starting with the pianist's composition "Azul de manicuare," the trio took on five additional Blanco originals, "Perú landó," "Poconos," "Roots & Effect," "Vals #5" and "Africa Latina," plus Cole Porter's "So In Love" and reedist Billy Drewes' "Brother Jack." "Roots & Effect" proved a highlight with Haddad's cymbals lending fuzzy edges to Blanco's opening chords, before the piano detoured into pop dance melodies, then tender ballad strains. Occhipinti shined on "Brother Jack," his solo therein sounding as plucked lyrics. Throughout the set, the trio traversed a series of melodic and rhythmic shifts—often within the confines of a single tune—that kept the music ever dancing, ever engaging.

Wielding tenor and soprano saxophones, and bass clarinet at various points during Saturday night's show, Potter led his quartet through a riveting set of music. The band, featuring pianist David Virelles, bassist Larry Grenadier and drummer Eric Harland alongside Potter, performed four pieces from the Odyssey-inspired Sirens ("Wine Dark Sea," "Wayfinder," "Penelope" and "The Sirens"), plus two earlier compositions by the saxophonist ("Five Points" and "Sky") and Thelonious Monk's "Four in One."

A standing ovation brought the band back (even as the house lights were beginning to lift) to have a go at "Darn That Dream."

The new tunes enjoyed more space on this night than they do on the record. Some of this the result of soloing choices and, no doubt, pre-concert structural decisions by the band. But the shift from the record's quintet to a quartet, with Virelles taking on all piano duties in Craig Taborn's absence, also opened things up, primarily through the character of Virelles' playing—the music now infused with dissonant voicings, chord progressions that seemed to fall back on themselves, sharply struck and spacious melodies, and the flare of Virelles' native Cuba. But Potter also added intros to "Penelope" and "The Sirens," spending several minutes to work his way alone into each song's haunting melody—on soprano sax and bass clarinet, respectively—as if needing to conjure them from a universe of spiraling sonic dust (his correlate, perhaps, to Homer's "Sing to me ... Muse").

On "The Sirens," a more forlorn song was sent down, the bass clarinet's warning call from the album replaced with a dirge that was already mourning the travelers at the moment they sailed into the sirens' radius. Later in the piece, Grenadier's bowed bass solo drew out the Indian melodies swimming just beneath the tune's surface. Indeed, there was a sea-like quality to this entire set of music, the instrumentalists riding waves to their height in a tumult, dipping into valleys of relief and often allowing one song to drift on into another. And there were the dry land breaks from the Odyssey suite that generally discarded the mood in favor of full- throttled wailings. Chief among these was "Four in One," on which Potter blew a tenor bop solo that shot through the music like a multi-threaded, metal cable, tightly coiled—such was its propulsion and precision. 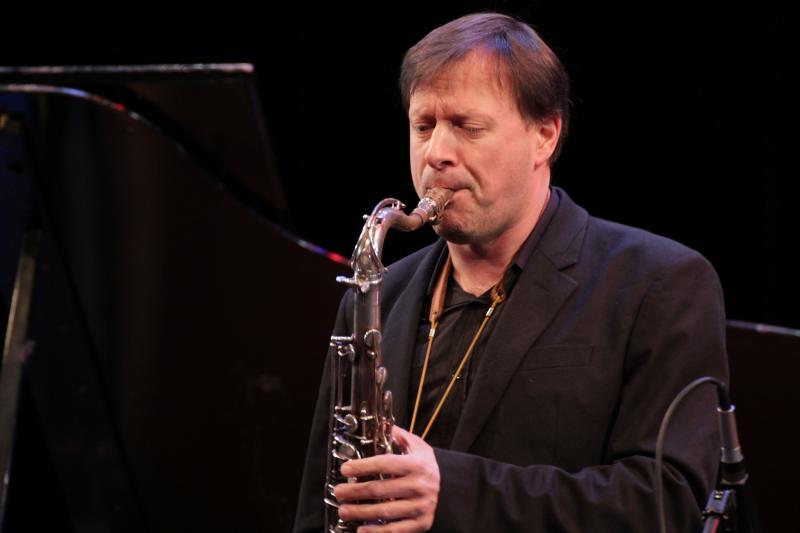 When the band stepped back on stage for "Darn That Dream," it opened in a decidedly romantic mood, with Potter's tenor purring over Harland's lush brush work. But later Potter's playing became more agitated (a baby in the audience even let out a few startled cries upon hearing the switch) then dipped into the pools of regret and longing that always keep lost dreams company. A crescendo with bowed bass and mallets pounding the snare drum lifted the song to its close. A final mallet shot ended it. And the dream was over.