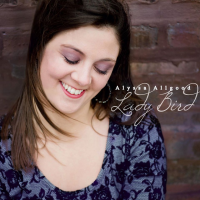 After two very promising vocalese offerings: Dorian Devin's The Procrastinator (Self Produced, 2013) and Angelica Matveeva's Vocalese (Self Produced, 2015), yet another traditional vocalese presents itself as an extended-play recording of what may be the most refined offering in the genre yet. Allgood's approach is superbly considered and delivered. Her command of the material has no peer.

Allgood's choice of an organ trio + tenor accompaniment is sheer genius. With this format, the singer's innate vocalese talent swings this a momentum not seen since Eddie Henderson's Letter From Home (Riverside, 1960). Her delivery of Charlie Parker's and Bob Dorough's "Yardbird Suite" salts the ground behind it. Allgood's articulation is perfect and unhurried, something that is an accomplishment when compared to past attempts. He paces herself and her band to the most effective delivery point. Her original, "Jaded" melds perfectly with Jobim's "If You Never Come to Me" and Tadd Dameron's "Lady Bird," the latter which is sheer perfection. Bravo, girl-next-door Alyssa Allgood. Produce that full-recording offering.