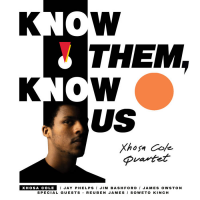 When tenor saxophonist Xhosa Cole won the BBC Young Jazz Musician of the Year prize in 2018, Britain was introduced to a young player with formidable technique and a solid grasp of the post-John Coltrane African American tradition. Cole was then little known outside Birmingham, his hometown in England's Midlands, and he had developed independently of London's alternative jazz scene. His classic as opposed to radical aesthetic brought a refreshing vibe. So too did that of saxophonist Alex Clarke, a finalist in the BBC's 2020 competition. Clarke is from the north of England and her paradigm is mainstream centred; in an interview with All About Jazz, Clarke named her two favourite tenor players as Scott Hamilton and Harry Allen. Young London lion Nubya Garcia, one of the BBC judges, was knocked out by Clarke's retroprecocity, calling her "a total joy." Clarke's post- competition album, when it comes, will be worth checking out.

But back to the disc at hand...

In summer 2021, Cole has released his debut album, which follows the same road map as his BBC sets. There are no originals and the seven tunes are a mixture of jazz standards and tunes from the Great American Songbook. The jazz standards are Woody Shaw's "Zoltan," Ornette Coleman's "Blues Connotation," Thelonious Monk's "Played Twice," Tadd Dameron's "On A Misty Night" and Lee Morgan's "Untitled Boogaloo," none of them hackneyed choices. The Songbook tunes are Bob Haggart's evergreen "What's New" and Rogers and Hart's less familiar "Manhattan," both of them given lovely readings, as is "On A Misty Night." Fellow Birmingham born and bred musicians alto saxophonist Soweto Kinch and pianist Reuben James join Cole's regular quartet on three tracks. Cole's technical facility has developed further, as you would expect, though he continues to play within the conventional range of his instrument, eschewing altissimo flights and broken notes. He is to be congratulated on not editing out the occasional intonation glitch, so keeping the album's in the moment atmosphere; if Hank Mobley and the young Coltrane could live with an unintended squawk or three, so can Cole.

There is nothing in the grooves, however, to support the assertion in the advance publicity that Cole's programme is "interpreted through a contemporary black British lens," despite the presence of Kinch, who raps as well as plays saxophone, and is an inspiration to many emergent players on London's alternative scene. This notion is usually invoked when a writer feels a British-made album ought to sound more obviously British and less hard-wired to the American tradition than in fact it does. (Just saying). The album title is taken from Dizzy Gillespie's bon mot regarding Louis Armstrong, "No him, no me," and Cole's liner note includes the observation, "The view is immense here standing on the shoulders of giants." There is nothing wrong, and indeed everything right, about musicians paying their respects to their formative influences. That said, the picture only becomes properly interesting once the newcomer starts to foreground their own trajectory and / or material. The aforementioned Reuben James, for instance, is a member of The Banger Factory, the band led by London-based trumpeter Mark Kavuma, whose hard bop style is refreshed by a hefty whack of original thinking. But Cole is still young and he has great promise. Stay tuned.