By Troy Dostert
August 4, 2022
Sign in to view read count 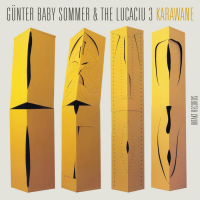 Long recognized as one of the most important exponents of European free jazz, drummer Günter Baby Sommer has refused to rest on his laurels, as he continues to do his part to maintain the legacy of free improvisation and creative jazz in a host of contexts, defying the aging process rather insouciantly while doing so. His historical credentials are unimpeachable, having worked with everyone from Peter Brötzmann to Cecil Taylor to Wadada Leo Smith, but his recent output has remained interesting and vital as well. He made a fine trio album with fellow free-jazz veteran Barry Guy and relative youngster Oliver Schwerdt in 2020, One for My Baby and One More for the Bass (Euphorium), and now he has forged a promising partnership with the Lucaciu brothers, three German musicians of a decidedly younger generation (all born in the 1980s). It's a rollicking good time, and a recording that spans the gamut of approaches to avant-garde jazz.

The title of the album is taken from the work of German Dada poet Hugo Ball, who essentially invented his own nonsense language in "Karawane" ("caravan" in English). The poem is recited/shouted/exclaimed by Sommer on the record's title track, and it exemplifies the album's spirit, as Sommer revels in the linguistic freedom Ball's poem allows, relishing each and every syllable, all while the band maintains an infectious, bouncy groove underneath. Alto saxophonist Antonio Lucaciu generates a dialogue with Sommer, echoing and prodding his ecstatic utterances, while pianist Simon and bassist Robert Lucaciu anchor the piece's driving momentum.

The group tends to stick with strong melodic cores and stout rhythms, as on "Dunkle Wolken," with Sommer unleashing a steady, propulsive beat underneath Antonio Lucaciu's fervid articulation of the folk-like melody. And "Unter Jedem Dach Ein Ach" possesses a loose, post-boppish framework that gives all four players room to stretch out. There are a few restrained moments as well, with a couple pieces composed by Simon Lucaciu ("Zeitwandlerin" and "Dialogue") that are somewhat more abstract and contemplative, and a couple that verge on the freely-improvised, like "Zustände." But the group is at its best when giving full rein to Sommer's irrepressible energy, and there is plenty of it here. "Impressions of Little Bird" carries an unmistakable Albert Ayler-esque feel, with Antonio Lucaciu's fiery soloing over Simon Lucaciu's gospel inflections and Sommer's insistent pulse, and "Pan" offers a shuffling beat and vigorous exchanges between saxophone and piano. There is even a Latin-influenced "Samba Pastouron," one of Sommer's five memorable compositions on the album.

Sommer's free instincts have never overshadowed his rootedness in the jazz tradition, and the gospel-drenched "Hymnus," the album's closer, is a case in point. Heartfelt and resonant, with plenty of Sommer's ardent vocalizations in the background, it nicely encapsulates the joy and delight of this invigorating recording.