By Karl Ackermann
August 4, 2022
Sign in to view read count 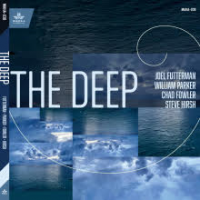 The Deep brings together the quartet of pianist Joel Futterman, bassist William Parker, saxophonist Chad Fowler, and drummer Steve Hirsh. Individually—and collectively—they have been the catalysts for many who wander to the farther bounds of jazz. This leaderless group has recorded in distinct member formations, with Futterman and Parker dating back to Authenticity (Kali Records, 1998). Fowler, on his Mahakala label, has issued post-2020 releases with each of his bandmates. The Deep comprises a single title track drawing on many strands of creative music but not settling down anywhere for an extended period.

The Deep leaps out, straight for the gut. Percussive piano and snarling saxophone dare the listener to turn away. The saxophone stirs the pot until a vortex forms and pulls the music into "The Deep." Four minutes in, the quartet has submerged and, entering new territory, they take a brief moment or so to find their bearings. They re-ignite in a frenzied series of small explosions, and then, peace. At fifteen minutes Futterman and Fowler slip into an elegant, asymmetrical duet, paving the way for another unexpected change of direction. The pair express a variety of temperaments as they passively follow or aggressively stalk each other; all the while, Parker seamlessly interjects secondary melodies. A little past the halfway mark, Hirsh comes to the front in an extended and animated solo. Fowler picks up the lead with a stunningly soulful passage, handing it off to Futterman, who holds that demeanor in place for a time. Again, the music explodes without warning and does not relent until the final moments of tranquility, somewhere above or below the surface.

The Deep was recorded in January 2022, in a single, spontaneous one-hour session. Futterman, Parker, Fowler, and Hirsh had not previously worked together as a quartet although their balance and responsiveness would belie that. The suite is spirited, forceful, and mystical; it demands and rewards attentive listening.