Opus 5: Swing On This 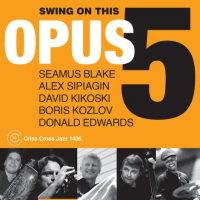 Recorded in September 2021, at the Samurai Hotel Recording Studio under the direction of Mike Marciano, this is the fifth album from contemporary jazz group, Opus 5. Entitled Swing On This, it comprises eight tracks that average around seven minutes each.

Hailing from the Netherlands, Opus 5 is a stylish quintet made up of Seamus Blake on tenor saxophone and Alex Sipiagin on trumpet, with drums by Donald Edwards, bass in the hands of Boris Kozlov and last but by no means least, David Kikoski in charge of piano and Fender Rhodes. All these musicians have worked with other prominent projects such as the Mingus Big Band, Eric Clapton and Elvis Costello. Here then is a proper little 'supergroup.'

The story behind their formation starts in 2010 when Sipiagin and Blake were sitting in Chicago's O'Hare airport awaiting a connecting flight and brainstorming ideas over a few pre-journey drinks. They decided to put a new group together and managed to recruit long time friends and colleagues Kikoski, Edwards and Kozlov. The first album was released in 2011 and the rest, as they say, is history.

The the album itself does have a professional feel to it, as you would expect from such accomplished musicians. Jazz specialist label Criss Cross has been involved from the start, too. The opener, written for the guys by trumpter/composer George Fontenette, is also the disc's title track. It begins with strong brass that continues throughout this technical, up-tempo number.

Up next is "Pythagoras." Donald Edward's drums provide a backdrop to the mellow tenor sax and the sharpness of Sipiagin's trumpet. "Moonbay" sidles in next and with its laidback warmth and a relaxed feel. "Fermata" is the longest track at two minutes shy of eleven minutes, and here, David Kikoski's piano and organ input comes to the fore, melding so well with the modern beat sound that pervades the whole of this album.

The final track is a cover of Bobby Watson's "In Case You Missed It," which rounds out the album perfectly, becoming a fitting conclusion to a most enjoyable album..

Swing On This; Pythagoras; Moonbay; Fermata; Finger Painted Swing; Sight Vision; The Great Divide; In Case You Missed It.