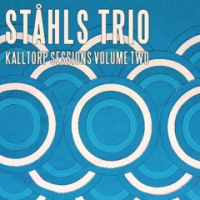 This is the third release by vibraphonist Mattias Ståhl, bassist Joe Williamson and drummer Christopher Cantillo and also the second release to come from the trio's 2017 studio recordings. Källtorp Sessions Volume Two adds trombonist Mats Aleklint on two tracks with Ståhl on soprano saxophone from what one assumes is an additional 2018 studio session.

Like Källtorp Sessions Volume One (Moserobie, 2019), the performances are crisp and nattily sharp. Ståhl's vibraphone, which can be heard in bands such as IPA, Alberto Pinton's ensembles, the various Angles' lineups, the septet The Way Ahead and with Per Texas Johansson, to name but a few examples, makes another strong case for the versatility and leadership possibilities of his instrument. Opening with "Vetstugo," Ståhl, Williamson, and Cantillo chase the melody as the pace continually escalates this muscular music. The gears shift with "Guldkort" (Gold Card) where each player acts as a colourist; Stahl's notes reverberating, Williamson pushing vibrations outward, and Cantillo commenting with brushes. With a vibraphone-led trio, the approach can sound like a piano trio, but also it can switch to be a percussion ensemble, as it does with "I-Land Du Välsignade." Here the trio sounds mechanical, as if we are deep within a complex mechanical system. "Ayler-Ekberg" is an efficient bebop tour. Clocking only three minutes forty-five, one can imagine an extended live performance.

The trio adds trombonist Mats Aleklint on two tracks. "Pondus Och Swing" mimics an elephant parade, as you might imagine the bowed bass and drums marching and trombone as the proboscis blasts. On "Vi Går Till Skolan" (we walk to school), Ståhl swaps his vibes for a soprano saxophone. The two horns face off much like Albert Ayler and Donald Ayler might have approached this anthem. In other words, this music is the healing force of the universe.