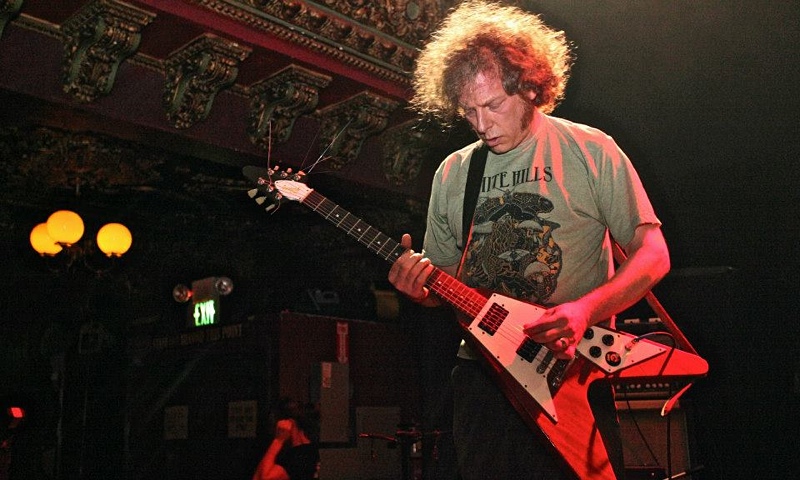 By ANTHONY SHAW
January 17, 2014
Sign in to view read count
Josh Pollock may seem a strange guitarist to be featured in a jazz magazine in as much as a large body of his music is distinctly rock-worthy. Indeed in this interview he explicitly avows the necessity for rock bands, and especially ones in which he is involved such as 3 Leafs and Citay, to really rock!

But in addition to his mainstay work in and around San Francisco theaters (Shotgun, EXIT Theater) Pollock has been participating in radical freestyle composition and performance, much of which can readily be incorporated under the jazz rubric. Most noteworthy of recent projects are his own project Auricle and Daevid Allen's University of Errors (UofE) and other Gong-referencing offshoots (Acid Motherhood for one).

These qualities aside, what intrigues me most about this musician is his intention and expertise in looking beyond the strictly auditory elements of performance, to see the broader nature of the art. Without making claim to creating a new aesthetic of performance, Pollock stakes his reputation on attempting top bring freshness to performance and composition. This can discomfort an audience accustomed to straight reproduction of familiar tunes in familiar guises, but surely lies at the heart of jazz performance. In Pollock's case it may be attributable to his left-handed approach to the (right-handed, re-tuned) guitar, as much as his left-field approach to life.

Maybe also his original training in theater craft and in particular in improvisation, in combination with his collaboration with the master of musical role-play Daevid Allen, brings out most powerfully his performance skills. Pollock's incorporation into the University of Errors)UofE), Allen's attempt to break away from the shackles of the heritage of acid-prog trailblazers Gong, was itself accidental. Having been invited to join an impromptu San Francisco studio jam Pollock defied both his and Allen's expectations (and even initial preferences) but prompted the then 60-something space veteran to re-examine his original iconoclastic performance roots (e.g. The Daevid Allen Trio in 1963) and start a new band. Although it has evolved far from its initial rough rock origin, it was always essentially a performance focused project, where Pollock could counter Allen's more lyrical, glissando orientated guitar and in the process develop his own unconventional style.

In this email interview Pollock relates his approach to making music (the guitar and other instruments, as well as effects) and how it has evolved during his time as a professional. The result nowadays is music that deliberately hard to classify, sitting on the fringes of jazz, space, noise and beauty.

All About Jazz: What was your background with the guitar, or other instruments?

Josh Pollock: I started playing guitar when I was about 16. Before that, I'd tried taking lessons for other instruments (piano, drums, violin!), but I found them to be really boring and uninspiring, focused as they were on "exercises" and songs I didn't care about, and they all fell by the wayside pretty quickly. It wasn't until I just picked up a guitar that was lying around and started trying to figure out songs I actually liked that I managed to get anywhere. My success with learning instruments skyrocketed once music teachers were out of the equation, which is ironic, because I now have a job as a music teacher! (I give drum lessons at a school for children age 6-13. But I make sure that they are playing songs that they like, as soon as possible and that they are having fun. If playing music is fun for them, I think they will naturally find themselves wanting to learn how to do paradiddles, rudiments, etc).

JP: The guitar is the instrument I have the deepest connection with—the one with which I can tap into the cosmos most purely and directly. Not so much at first, of course, but definitely by the mid-90s when, frustrated and bored by the same old chords/licks and intrigued by bands such as Sonic Youth and Pavement, I started retuning my guitar, randomly, settling on a vaguely open-C tuning that I used exclusively for years. (All my playing with Daevid Allen has been in this tuning.) It put me back in the position of having only the faintest idea what I was doing, which could have been a recipe for disaster, but suddenly playing guitar was really fun again, and my playing got a lot more interesting, both to me, and apparently, everyone else. I took a long, long break from standard tuning—probably about 10 years, which was just long enough to make it alluring and intriguing again, so now I use it, but I still use the alternate tuning when the circumstances call for it.

I've also spent time (a lot of time) gradually getting adept at using effects pedals—that has been huge. I think I've finally found a voice of my own as a guitarist in the last few years, and that, to me, is the most important thing. All my favorite guitarists (Marc Ribot, Richard Thompson, Agata...) have instantly recognizable styles, and don't sound like anyone else. I have no patience for merely "skillful" guitarists. I'll take Blixa Bargeld over Eric Clapton any day!

AAJ: How much do you use music in your theater activities?

JP: Plenty. Most theater people don't actually know much about music, at least not here in the U.S. (though they often think they do...), so if they've got someone around who can play instruments and compose they'll generally take advantage of it, as they should. This has been both an advantage and a bit of a curse—being a musician has helped me get a few acting jobs I wouldn't have gotten otherwise, but it also means that the juicier, larger roles will often go to someone who can "only" act, while I end up playing music for most of the show, except for 5 minutes somewhere where I pop in as a bumbling waiter.

Regardless, I've written and performed music for a number of theater projects—though generally not straight-up musicals, as those require sight-reading skills I don't really have. I've done a couple 'standard' musicals, like "The Threepenny Opera" and the first U.S. run of Tom Waits' adaption of "Woyzeck," but I learned the songs by listening to recordings and memorizing them, and even then I was given a lot of leeway to come up with my own parts (all too rare in the musical theater world). These shows were typical of the plays I end up doing music in, in that they were both projects in which the director did not want "the usual," and thus, came to me. (I personally can't stand the sound of a standard theater pit band.)

I'm a huge Tom Waits fan, and one of the aspects of his aesthetic that I respond to most strongly is his junkyard voodoo approach to percussion. When I got asked to do "Woyzeck," I just knew that a normal, boring, standard drum set would just cut the show's dick off before it'd even started. Tom Waits' music needs to go 'CLONK,' and 'CLINK,' and 'BLAM.' So for the show, I put together a crazy percussion set comprised mainly of junk: a filing cabinet that I'd found on the street, a wine bottle, a coffee mug (I actually went through a few of those), etc. The closest thing there was to a "drum" was a huge wine barrel with a bass drum head stretched over it. And it sounded awesome, and fresh, and it totally suited the material. Most professional drummers would've just shown up with the same drum set they use for everything and played whatever was written down. This is anathema to me. (In addition to all the percussion, I also insisted on playing all the guitar and vibraphone—I'd seen a couple Tom Waits musicals before this where I felt the music had been handled really badly, so I didn't trust anybody with anything!)

As someone with lifelong interests in both theater and music, I am fascinated with the combination of the two, mainly because it's usually so terrible. You'd think they'd be a natural combination, but I find most "musical theater" unbearable, and most bands' attempts at incorporating "theatricality" to be unfortunate. I dream of a music/theater that's like seeing a great band and a great play at the same time. I've been working toward it over the years—observing what works, what doesn't, and why...

AAJ: What were your dreams as an amateur guitarist?

JP: All I want to do is make my art, put it out into the world, and (this is key:)get a reaction. My role models are people like Mike Patton and John Zorn—distinctive, uncompromising, and productive artists who do lots of very different things, and have hardcore followings of people who are inherently interested in anything they're involved in. Making a living at it, as Patton and Zorn do, would certainly be pretty sweet, but more importantly, I want a group of people with whom my work resonates to such a degree that my involvement in a project is enough to make them want to check it out. If there were 2,000 people in the world like that, I'd be the happiest guy on Earth. I think I'm up to about 14...

My popularity level is out of my hands, obviously, but my productivity level is not, so: I produce. It's of primary importance to me to be able to answer the question "So what have you done to make you worthy of an audience?" with, "Well, all this." So I work. Between all my various bands and projects, I've released 20 records in the last two years alone—I think by anyone's standards that's not to bad.

So yeah: I have the not-terribly-uncommon dream of being a popular and profitable artist, but really, as long as I can keep making my art and have the world react to it (even negatively), I'm ok.

AAJ: Has anyone else commented on your guitar style- right-handed guitar played left-handedly, like Youknowwho..

JP: Ha! No. Needless to say, any comparison to Jimi Hendrix, however undeserved, is welcome, but the key difference between he and I in this regard is that he, like most left-handed guitarists, switched the strings around, whereas I just picked up a right handed guitar and turned it upside-down and backwards (with the lower, bigger strings on the bottom). By the time I realized that lefties usually switch the strings, I was to far along to just start all over again, so I didn't bother. There isn't really anything that playing this way keeps me from doing, except classical and folk finger-picking. I like finger-picking, but ...c'est la vie.

AAJ: Did you have a clear idea of your role in UofE before joining or did it evolve?