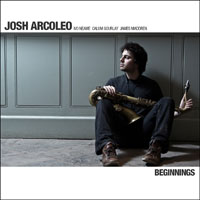 Over the decades since Coleman Hawkins and Lester Young were making their reputations, forging in their wake two very different paradigms for the tenor saxophone, the instrument's players have acquired something of the aura of the gunslingers of the American Frontier. Other instruments lend themselves to compare-and-contrast, too, but there is something uniquely high noon about the tenor and its place in jazz legend.

Although Britain's Josh Arcoleo may or may not see it quite like this himself—and he probably does not, being disarmingly modest of mien—the 23-year old is the new fast-draw in town. Beginnings, Arcoleo's debut album, reveals a precociously mature player, who, if he has not yet completely grown out of his influences, already possesses an individual and compelling voice.

Arcoleo names Sonny Rollins and Joe Henderson as early inspirations, along with onetime Rollins student and James Brown alumnus, Pee Wee Ellis, who Arcoleo started taking lessons with at age 13. Serendipity excelled itself here: Ellis lives in the same Somerset village as Arcoleo's parents, and, shortly after Arcoleo was given a tenor for his birthday, his mother came across Ellis practising in the local churchyard. She did not know who Ellis was, but, a classical flautist herself, recognised a major talent and asked Ellis if he would tutor her son. Three years after taking his first lesson, now aged 16, Arcoleo joined Ellis' Still Black Still Proud band, performing at number one venues and festivals across Europe and sharing the bandstand with a roster of major guest artists. Formative experiences do not come any better.

Pharoah Sanders might also be among Arcoleo's influences, for the mellifluous, low register multiphonics which became a signature sound of the astral jazz Sanders created with harpist/pianist Alice Coltrane in the late 1960s and early 1970s. Rollins' and Henderson's big-tenor influences are heard throughout Beginnings; Sanders' legacy colors at least part of most tracks.

Sound good so far? It gets better. Arcoleo writes characterful, melodically strong tunes (all eight here are originals), and he has a great trio of young lions behind him: Loop and F-IRE collectives luminary, pianist Ivo Neame, bassist Calum Gourlay and drummer James Maddren. Gourlay and Maddren are part of Mercury Prize nominee, pianist Kit Downes' trio, with which Arcoleo guested on tour following the release of its 2011 Basho album Quiet Tiger (on which the reeds guest was tenor saxophonist and bass clarinetist James Allsopp).

Arcoleo's command of multiphonics is among the chief pleasures of Beginnings and, above all, of the title track. On this, he opens with a passage so richly layered that you may wonder, for a moment, whether a little overdubbing has been sneaked in. Closer listening says not. Later, his solo employs similar effects and sustains them over tricky to control, long-held tones. The sound is gorgeous; rough but pleasing to the ear. Two ballads are equally memorable. "Glade" is soft and sunlit; "Phoenix" much the same until Maddren takes it out, midway, for a vigorous shakedown.

Britain is currently so ill-served by its politicians that it is unusual to be able to credit them with getting anything right. But a handful got it right in 2011 when Arcoleo won a Yamaha Parliamentary Jazz Scholarship. More importantly, the same year, he won the Kenny Wheeler Jazz Prize, awarded by a panel of judges that included Edition Records' Dave Stapleton and saxophonist Evan Parker. The prize was a record deal with Edition.

Many debut albums, however promising, have playing times that outstay their welcome. (Has a debutante ever actually released a double album? Or do they sometimes just sound like that?). Arcoleo's maturity—or perhaps that of executive producer Stapleton—has constrained Beginnings to just under 47 minutes. The music is so satisfying that it could have held the attention for far longer. Fortunately, we are likely to hear a lot more from Arcoleo.