By JAKOB BAEKGAARD
October 7, 2019
Sign in to view read count
John Law is one of the most prominent pianists on the British jazz scene and he is also a distinctive composer. So far, he has focused primarily on building a substantial compositional body of work, culminating in his ambitious Art of Sound tetralogy (33 Jazz, 2007-2009), followed by strong records like Three Leaps of the Gazelle (33 Jazz, 2012) and the double-album These Skies In Which We Rust (33extreme, 2015).

However, Law's focus on refining his own compositions has not prevented him from experimenting with electronics, recording a remarkable duo record with upcoming pianist, Mark Pringle, and interpreting J.S. Bach's Goldberg Variations. Recently, Law has also explored the work of other composers through his Re-Creations Quartet with bassist James Agg, drummer Billy Weir and saxophonist Sam Crockatt. It started out with Law doing some arrangements of other people's music and gradually the quartet has developed its own aesthetic playing covers. The result of Law's exploration of covers is a trilogy with two records by the quartet and one solo record. 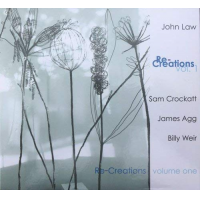 Re-Creations Vol. 1 is the introduction to the work of the quartet and their method of transforming familiar tunes into new musical shapes. Law has stressed that the Re-Creations Quartet is not a standard-type jam band. Although they do play some standards, they work with carefully arranged tunes that they are able to take somewhere else live and in the studio.

The cover material on Re-Creations Vol. 1 can be grouped into three categories. One: compositions by other jazz musicians (Steve Swallow, Miles Davis). Two: standards (Autumn Leaves, Blame It On My Youth, Easy Living, You Don't Know What love Is). Three: pop music in the broadest sense (Beatles, Sting, Nick Drake).

Listening to the quartet's exploration of these tunes is really a chance to hear them again in a new light. While the classic riff of Miles Davis' "So What" is kept intact, it has new harmonic robes and Drake's autumnal melancholy gets brighter shades in the group's reading.

A highlight is the interpretation of Sting's "Fields of Gold" with an ethereal intro with glockenspiel and piano dew drops that gently build up a story without giving the signature melodic line away too quickly, and when it does appear, the tempo is slowed down. It's a lovely walk in the fields. 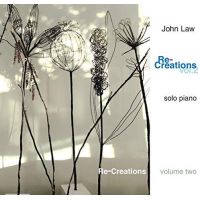 The second volume in the Re-Creations trilogy is a solo record. It introduces a new category: classical music (Chopin, Bach) and in fact, the album is bookended by classical music, starting with Frédéric Chopin's "Étude Op. 10 No. 4" and ending with Bach's "Sleeper's Wake." This move gives the album a narrative frame, but new meaning also arises in the juxtaposition of pieces. Thus, the dazzling keyboard wizardry of Chopin's etude is followed by the equally equilibristic "57 Varieties/Carolina Shout," (Earl Hines, James P. Johnson) highlighting the connection between classical music and stride. In the same way, the reading of the standard "Angel Eyes" brings one of Chopin's nocturnes to mind.

Everything is connected on the record that is both modern and traditional, hushed and hectic. Law flexes his piano muscles, but also breathes deep in "Darn That Dream," and delivers a delicate interpretation of "My Favourite Things," spun of the finest musical silk.

However, it's not just old tunes he takes on, but also pieces by jazz composers (Pat Metheny, Herbie Hancock and Kenny Wheeler) and Law's interpretation of Stevie Wonder's "Summer Soft" is just that, soft like the gentle rays of sunshine shining through a window.

Law has compared this record to a private rehearsal and indeed there's a sense of intimacy and relaxation about the session, but it also has the discipline of a trained musician, who allows the music to pour out. The album comes with the bonus of the superb sound sculpted by Stefano Amerio. 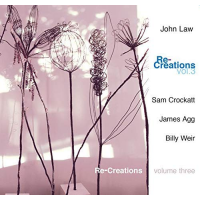 The third and final volume in the Re-Creations trilogy brings the quartet back, and it's even bolder than before. Starting out with the wonderful rendition of Erik Satie's "Gymnopédie No. 1," the quartet adds classical music to their repertoire and keeps the airy melodic elegance of the music while adding a rhythmical touch that transforms the piece. The quartet does the same thing to "Over the Rainbow."

In fact, "Over the Rainbow" is part of what could be called a sentimental triptych with "What a Wonderful World" and "Imagine" completing the picture. Playing such tunes involves a great deal of risk, too much emotion and the pieces are easily on the wrong side of pathos and too little strips them of their timeless poetry. The quartet finds a balance and a way to make the music new again, especially using the tool of rhythmical reconfiguration. Elsewhere, they polish the stones of Radiohead's "Pyramid" to make it shine as a piece of melodic architecture.

Once again, there's a lot of thought put in the juxtaposition of pieces. What a good idea to put Paul McCartney's playful "Ob-La-Di, Ob-La-Da" next to John Lennon's serious anthem "Imagine." Speaking of imagination, it's not easy to imagine what this quartet can do with a song before you have heard it.

Law has promised a return to his own compositions and has recently signed with Ubuntu Records. It will be exciting to hear where he will take his own music next time, but these records prove that Law can play in the double sense of the world and while having seriously fun, he and the quartet open new paths to the beauty of already established tunes.

Tracks: Falling Grace; Fields of Gold; Autumn Leaves; I Can't Help It; Norwegian Wood; River Man; Easy Living; So What; Blame It On My Youth; You Don't Know What Love Is.