BY KARL ACKERMANN
October 7, 2019
Sign in to view read count 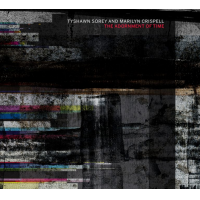 Sorey and Crispell met fifteen years ago when both were performing at a festival in Europe, but they did not play together until almost ten years later. It was from that initial contact that Crispell felt a common bond rooted in the drummer's techniques and approaches. Sorey knew Crispell's contribution to Anthony Braxton's long-running quartet and, early on, had made a mental note to reach out for a future collaboration.

Sorey and Crispell have worked in innumerable styles and genres; Crispell, from experimentalism (Pauline Oliveros), to the New York City Opera. She has collaborated with filmmakers, dancers, and poets. Likewise, multi-instrumentalist Sorey—a MacArthur Fellowship recipient—is an Assistant Professor of Composition and Creative Music at Wesleyan University, and has a broad resume that extends from John Zorn to Opera Philadelphia. These experiences help inform "The Adornment of Time" with its narrative that alternates from tranquil to boisterous, to near silence. Crispell's playing is sometimes delicate, other times, thunderous. She has the uncanny ability to create palpable tension without sacrificing the fluidity of the music; it's a critical factor in an extended work of this nature. Sorey, with an orchestra-sized drum kit, has stated that he doesn't have a particular style of playing. That freedom manifests itself in fragile passages with bells and gongs, and booming eruptions.

Sorey and Crispell did not have a mutual briefing session before the performance, a fact that makes the synchronicity remarkable. As these two innovators often do, they create outside any obvious genre, but with a concentration on many musical foundations. The audience is spellbound—silent for the entire piece; it's likely many listeners will react the same way. Highly recommended.

The Adornment of Time