By Doug Collette
December 28, 2020
Sign in to view read count 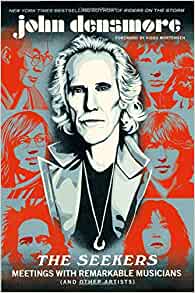 John Densmore's third book, The Seekers, carries the unusual distinction of featuring a blurb on its back cover that actually speaks accurately to the contents inside. John Doe, co-founder of seminal punk band X, likens The Doors drummer's style of composition to his work at the kit. And it's true because, unlike the relatively consistent, to-the-point prose comprising Riders on the Storm: My Life with Jim Morrison and the Doors (Delta, 1991) and The Doors Unhinged: Jim Morrison's Legacy Goes on Trial (Percussive Press, 2013), Meetings With Remarkable Musicians(And Other Artists), features writing that is generally solid and occasionally brilliant, but often prosaic as well. The exact proportions of those elements depends on who and what the author is discussing, whether it's a direct encounter with spiritual teacher, psychologist, and author Baba Ram Dass or an indirect observation of deceased Texas blues-rock vocalist Janis Joplin.

Densmore generally maintains a down-to-earth air, at least when he's speaking as a self-avowed musiclover to a like-minded readership. And when he alludes to or comments directly about the mystical power of the art form, he maintains his acuity, refusing to become lost in his verbal meditations; this clarity of mind only renders more credible the bedrock premise here, that is, that we all contain the creative impulse within us and only need to nurture it. Still, at least in the early going. the writer can't resist turning pedantic: tossing out technical terms such as 'pianissimo' and 'fortissimo' or 'jazz slang' like 'traps' only makes him sound like he's straining for effect.

By the end of these two-hundred and one pages, it's impossible to dispel the notion that a more refined concept might have been applied to The Seekers. Seemingly chronological,there is no specifically designated order to the two dozen chapters so perhaps separating the encounters with musicians from other artists, allocating separate segments for spiritual ruminations or simply devising a completely separate book devoted to philosophy, would lessen the mixed messages and often muddled tone of what's otherwise a rather remarkable array of subjects.

Then again, the solution to that conundrum may be as simple as carefully picking and choosing what to read and in what order. Perusing John Densmore's pieces on the musical artists first, and then all the others would provide a clearer filter on the aforementioned main theme. That would not erase the implicit pretension of Viggo Mortensen's introductory verse, '"Seekers All," but it would more effectively sublimate a creeping sense of holier-than-thou sanctimony that arises as the book comes to a close with the author's 'Blessings.'

Fortunately, that off-putting dynamic only surfaces at fleeting intervals. Densmore does sounds oddly detached in the piece devoted to his late Doors band mate, vocalist/composer Jim Morrison. He is noticeably more open and insightful as he ruminates on his relationship with another deceased partner of the iconic quartet, keyboardist Ray Manzarek and his perspective on their chemistry, along with guitarist Robbie Krieger and the frontman, is the lens by which he focuses on the ineffable bond of a truly great band. The writer is similarly discerning in discussing the personal and artistic magnetism of the Los Angeles Philharmonic's precocious conductor Gustavo Dudamel, as well the charisma of ageless country music icon Willie Nelson.

Such quasi-mystical implications, though, are a stark contrast to the writer's apparent namedropping. For instance, when Densmore recounts his attendance at an appearance of the Dalai Lama, mentions of other notables including actors Harrison Ford and Richard Gere, threaten to overshadow his magnanimous reaction to what he perceives as an affront by the spiritual master. He is hardly so charitable when admitting to a year-long grudge against Van Morrison for an on-stage faux pas.

And that's also where a certain misplaced sense of ego intrudes upon Meetings With Remarkable Musicians(And Other Artists). Unlike those who may not have the means to indulge our own artistic sides, much less have the green room access so often described here, John Densmore sounds blissfully unaware of his rarefied status, at least in the circle of professional musicians. Luckily, he more often than not posits himself earnestly and humbly as a fan and admirer of those about whom he writes such as the late reggae icon Bob Marley or Indian sitar master Ravi Shankar.

That's a sensation even more apparent if the objects of John Densmore's esteem, such as poet Robert Bly and historian Joseph Campbell, reside outside the percussionist's community of peers. There's no question that relegating accounts of contacts with the likes of his idols, like drummer Elvin Jones, if not married to the writer's personal history of enlightenment, might make for a markedly shorter and perhaps less widely-marketable piece of work. But it would also preclude a nagging air of condescension that afflicts The Seekers: Meetings With Remarkable Musicians (And Other Artists): the man's expression(s) of humility sometimes sound affected.

Ultimately, though, that shortfall doesn't undermine how essentially fascinating it is to read this veteran musician's thoughts. Densmore's greatest charm here may very well be that he is not averse to demonstrating his enthusiasm and excitement about his subjects, even if he has a tendency to become overly effusive. In that regard, these reflections should striking a resonant chord in any aficionado of the arts, especially if that individual has acted upon the inspiration taken from his/ or her object(s) of admiration.