James Douglas Morrison was born to George and Clara Morrison in Melbourne, Florida. A Naval officer, George was forced to move his family around a lot when Jim was a child, and some say that fact led to Jim's unique method of speaking out.

Upon graduation from George Washington High School in Alexandria, Virginia, Jim continued his education at several institutions before finding his way to California, and UCLA. He began studying film, his true desire, and got into music accidentally. It was soon after that he met Ray Manzarek on a Venice beach, who was already in a band called “Rick and the Ravens”. Jim joined the already formed band, and in the autumn of 1965, the Raven's recorded a 6 track album, featuring “Moonlight Drive”, “Summer's Almost Gone”, and “Break on Through”. Jim took to the streets of LA, searching for a contract at all of the major LA recording studios.

Several months later, the head of talent research at Columbia Records, Billy James heard the album and signed the Raven's to a six month contract. It was soon that Robby Krieger joined the band, completing the foursome that came to be known as the Doors.

Jim convinced his band mates to change the name to the Doors, based on two distinct pieces of writing. Aldous Huxley's cult hit, “The Doors of Perception” and a quote by William Blake. “There are things known, and there are things unknown and in between are the doors”. From that moment on, history would never be the same. Jim was coming into his own, and he was ready to make a splash.

In 1966, Columbia Records dropped the Doors, who were by this time playing 5 shows a day, 6 days a week just to make ends meet. Playing at a tiny Sunset Strip Club known as “The London Fog”, Jim became known throughout LA as a fiery, passionate sex symbol. By the end of 1966, things were looking up for Jim and the others. They moved their shows to a more fashionable club, “Whiskey a Go Go”, and it was there that “Love” band member Arthur Lee convinced Jac Holzman of Elektra Records to sign them up.

Late 1966 to early 1967 proved to be an exciting time in Jim's life. It was in this period that he was achieving the fame that was inevitable. They recorded their first album which featured “Light My Fire”. It went to number one in the US in April of 1967, and world wide recognition was only one step away. Morrison soon became heralded as a rock idol, and he began to adopt his 'Lizard King' image, along with different music styles.

The electric sounds, the often cryptic lyrics, all gave birth to Jim's stage presence, where he could be himself. When he was on stage, he was controlled by his music, and with his music he could control the audience. He also claimed that when he was performing, the 'spirits' of dead Indians took him over. That earned him the name “The Electric Shaman.” Some concert goers even claimed they saw the shaman side of him, and that gives great credit to the power he possessed.

In 1968, with the war in Vietnam escalating, the band's third album “Waiting for the Sun” reflected the protests against the fighting. Although some of Jim's earlier underground fans didn't particularly like his 'shallow political movement'. The Doors next big release was “Hello, I Love You”, and it too soared to the tops of American charts, and placed 15 on the UK music charts.

It was during that time in Jim's life that he began to devote more of his passion to his writings. He even self-published some of his works for friends and family. Morrison then published The Lords and The New Creatures in 1969. Each copy of the books were dedicated “To Pamela”, Pamela Courson, Jim's girlfriend (who later became his wife), who was with him until he died.

Too soon, Jim's wild behavior began to cause him trouble. Obscene dancing, and lewd behavior involving a young female groupie, at a Connecticut concert got him sprayed with tear gas, and charged with breaching the peace and resisting arrest. Jim's reputation as a leather-wearing, drunk was beginning to proceed him, but he never played down the rumors, Jim Morrison was who he was.

During a Miami concert, Jim was also charged with 2 counts of indecent exposure, 2 counts for open profanity, 1 for public drunkenness and one more for his “lewd and lascivious behavior for exposing himself and by simulating masturbation”. Jim was found guilty of indecent exposure, and concert promoters now feared a repeat of the Miami events, and concert bookings dropped. However Morrison didn't seem bothered by the change in events, for he had never been completely sure about how he felt over his popularity. In fact, some feel he was determined to ruin his career. The Jim Morrison the world knew, was not the Morrison he wanted to be. To himself, he was James Douglas, not the rock star idol everyone portrayed him to be.

Nineteen sixty nine was also the year the Doors released “The Soft Parade”, but the album fell pray to critical acclaim. It lacked Morrison's normal enthusiasm, energy and direction, and many believed Jim's moment in the sun was screeching to a halt.

The next year, “Absolutely Live” was released, but had most of the same problems as the previous album. It lacked the earlier verve Jim's lyrics had once conveyed. Later that same year, the Doors released “Morrison Hotel”, much to the pleasure of fans, this album was cruder and more reminiscent on Jim's earlier self. It earned a half way good review. The success of that album, led to the success of “LA Woman” which was released in 1971. That album proved that Jim and the others had learned a lot in the past years, and their image was becoming more responsible. Jim's drinking problem, however still there, was starting to fade, and for once, things looked to be on the up and up.

Unfortunately, Jim soon left the band after that albums release, and several months before “Riders on the Storm” went to 14 on the US charts. Sadly, Jim's star burnt out soon after, and on a Saturday night in a Paris hotel room, Jim Morrison died of heart failure and became number three, following in the footsteps of Janis Joplin and Jimi Hendrix who had both died the previous year. Jim's wife Pamela and an anonymous doctor were the only two to see Jim's body. To this day, that fact disturbs many, and over the years, has given rise to rumors that Jim faked his death to finally escape the limelight that had been consuming him.

However, Jim Morrison was more than a poet, more than a songwriter and a performer. He was a man, a husband and an idol to millions. Although his shooting star has come and gone, he has forever earned himself a place in musical and cultural history. Every year, thousands of fans still flock to see Jim at his final resting place. Pere-Lachaisse cemetery in Paris, France.

The remaining members of the Doors continued with their music, releasing another album, but found it too hard to carry on without Jim. They broke up in 1973. Although since then, several albums have been released featuring the bands greatest hits, and in 1991 Oliver Stone's movie 'The Doors' gave a new generation a look at the man behind the myth. In 1993, The Doors were inducted into the Rock and Roll Hall of Fame. Show less

The Doors Respond to Florida's Pardon of Jim Morrison

”I see myself as a huge fiery comet, a shooting star. Everyone stops, points up and gasps, “Oh look at that!” Then - whoosh, and I'm gone... and they'll never see anything like it ever again... and they won't be able to forget me - ever.”-
Jim Morrison 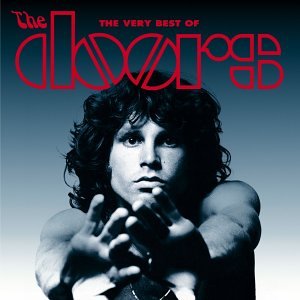 All About Jazz musician pages are maintained by musicians, publicists and trusted members like you. Interested? Tell us why you would like to improve the Jim Morrison musician page.