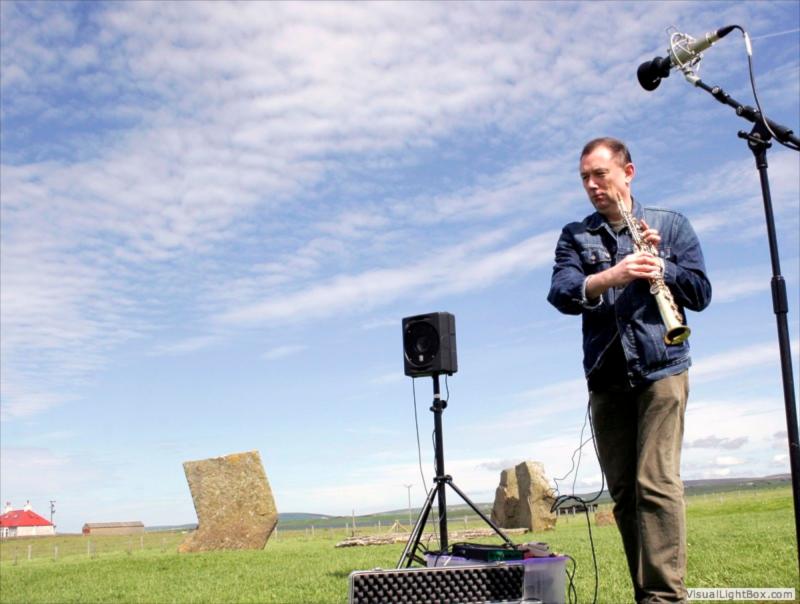 BY SAMMY STEIN
November 7, 2014
Sign in to view read count
Saxophonist John Butcher's career could have taken an academic path. He completed a Ph.D in theoretical physics—Charmed Quarks to be precise—but left the academic world behind shortly thereafter.

As a saxophonist, Butcher has played with and collaborated with many musicians. He is not afraid to try completely off the wall musical experimentation.

All About Jazz: What is your background? Where did you grow up and how did you come to music?

John Butcher: I was born in Brighton, grew up in South London/Kent. The Beatles were the first musical excitement I remember, around '64. My mum bought a record player so my brother and I could start getting their records. Then came random TV and radio exposure into my early teens. I just felt drawn to music. Trouble was, I was good at maths/science, and at my secondary school you couldn't combine that with the arts. I tried O-level lessons with the music teacher in his lunch break, but he soon got fed up with that. I was a schoolboy at the tail end of the British blues boom, and listened a lot to Mike Raven's radio show, which played rural blues. It was a powerful aural opening to a very extraodinary world. People like blues singers Blind Lemon Jefferson, Robert Johnson and Bukka White. I still like that stuff a lot.

AAJ: Who or what inspired you to play—instruments if any and order and how did you first know your instrument?

JB: Recorder, piano (classical lessons), bedroom guitar, saxophone—with a bit of tape-recorder thrown in around 16 when I discovered Stockhausen. I'd wanted to play something for as long as I could remember, and although my father had been an amateur singer in shows in his earlier days, he rather discouraged it. Fortunately, my brother was as obsessed as me and we spurred each other on. He persuaded me to go on a jazz summer school in South London, run by a mixture of British players like pianist Stan Tracey, musician and teacher Eddie Harvey, drummer John Stevens, trombonist Paul Rutherford, and saxophonist, clarinetist and pianist Mike Osborne. I was playing piano then and had some very useful lessons with Stan. I got into what was happening in London at that time (early 70s), by going to concerts, before I had heard more than a few notes of American jazz.

AAJ: Where did you first perform and what people/bands have you played with? Can you give a rough guide?

AAJ: Can you describe the emotions when you perform? What reactions do you notice from audiences?

JB:-Playing for an audience is one of the few situations where I actually feel in the moment, experiencing time whilst it is passing, connected to events. Regarding audiences, is run from hatred to adulation ....

AAJ What music do you listen to?

JB Loads. At the moment I'm digging deep into Bob Dylan, having only come to get him in the last few years. Also listening to a lot of saxophonist Lester Young and Greek Rembetika. I hear a lot of live improvising by colleagues playing the same festivals.

AAJ Do you have a philosophy on life and music?

JB I guess so, but it's not available in any pithy form. For the musical side I'd suggest reading this, which tries to describe what I've learnt over these years. When I was younger and didn't know much I had a lot of strong opinions—but now I find they're all pretty fuzzy around the edges. [John has written several essays over the years—some of them extensive. The one he refers to was commissioned for the publication 'Aspekte der Freien Improvisation in der Musik' by Dieter A Nanz in 2011.]

AAJ: What would say are your current influences musically?

JB: What influences your music often isn't other musical things, and you often don't notice them till way after the event. One constant though is the effect of the people I play with, both positively and negatively.

AAJ: Where have you found the most appreciative audiences?

JB: Just differently appreciative (and sometimes not), around the world. I can read the response of an Austrian audience better than a Japanese audience, for instance—but how do you compare what they're feeling? That said—the Austrian Festivals in Nickelsdorf, Ulrichsberg and Wels, have each been run for 30 years by amazing supporters of "new" music—and have built up very informed and passionate audiences.

AAJ: When you play, how aware are you of musicians-those onstage with you-how would you describe the connections the music makes between band members and audiences?

JB: It would make no sense if I wasn't as aware as I possibly can be of the musicians I'm onstage with. We're inventing by listening to each other. On a good night the audience hears the "why" of things happening—although any response or interpretation will be pretty subjective.

AAJ: What of the future? Are there any projects up and coming or things you would like to do as far as the music or anything else?

JB: I am Looking forward to three performances of Tarab Cuts in London, Barcelona and Rio de Janero, then the two birthday shows at Cafe Oto. The Apophonics (Robair on energised surfaces and synthesiser, Butcher on saxophones and Edwards on double bass) is one of the bands I'm planning to tour with more in 2015 I'd also like to push further in to the site-specific solo work I've been doing over the last few years in unusual and extreme acoustics.