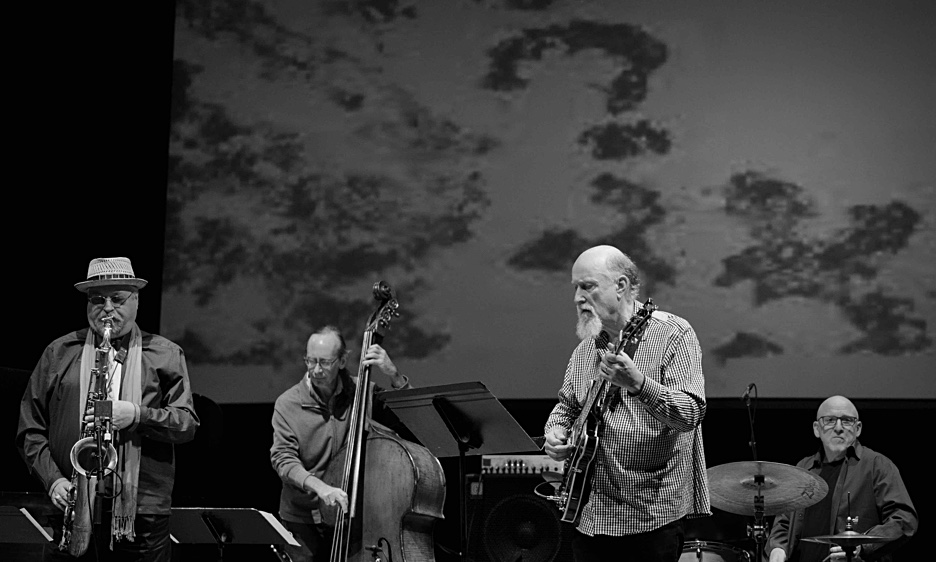 When John Abercrombie turned off the amplifier of life in 2017, the world lost not only one of its most distinctive guitarists but also one of jazz's brightest souls. As made clear by those still casting shadows in his light, he was someone whose midnight oil burned so that others would know what lay ahead. Even so, under cover of a balmy evening in Brooklyn, a convocation of indebted musicians saw fit to take a patient look back at his extensive career in a star-studded tribute—"star" being the operative word, as the depth of Abercrombie's creative sky was only emphasized by the twinkling it afforded to every constellation he animated. At the heart of his sonic fission was a personal commitment to playing at the highest level, regardless of context. Such were the sentiments expressed in a 2013 interview clip played both before and after the concert, in which he professed, "You have to hear yourself from the inside," and by that statement articulated an organic consequence of his sound. But, while listeners might very well have gotten only half of the story, what separated Abercrombie's playing from the pack was how he always made us feel like we were getting the full story. For confirmation, one need only spin the globe of his catalog and stop on any given track, wherein you'll be met by a narrative terrain replete with beginning, middle, and end.

In that regard, Abercrombie understood both the melodic nature of his material and the material nature of his melodies. This more than any other aspect of his music came out in the textural spectrum unraveled by his soundest interpreters. The concert featured seven distinct configurations, as if each were a link—one for every decade he lived— in the chain of his earthly transit. Said chain was more than a metaphor; it was an active part of the program, as at least one musician from each group carried over into the next. First to take the stage was the band featured on Wait Till You See Her (2009, ECM) with violinist Mark Feldman, bassist Thomas Morgan, and drummer Joey Baron. Guitarist Bill Frisell substituted at the helm, bringing his own mixture of charm and rigor. He and Morgan began in duet with "Epilogue," thereby setting a tone of joyful elegy. In so doing, they tapped into their dedicatee's fearless intrepidness. Following this were two offerings from the full quartet: "Sad Song" and "Anniversary Waltz." Each was a fluid rustle made manifest by artists working at the highest level of reverence. Baron and Frisell moved in tandem, one the wind to the other's lilting shadow, while Morgan upped the melodic quotient exponentially. With so much heartfelt energy swirling around him, Feldman dipped into every corner of his palette, his bow turning into one of the most evocative brushes of the performance.

More than anything, this quartet upheld Abercrombie's music as a gradual emergence of self-awareness, humble and integrated, so that when Frisell passed the reins to Nels Cline—leading a group with pianist Marc Copland, drummer Peter Erskine, and Morgan—one could only feel it as an organic progression. Referencing Characters (1978, ECM), Cline opened with the unaccompanied "Memoirs" before rowing the waters of "Boat Song." His programmatic details (use of harmonics, playing behind the bridge, etc.) were artful and effective, and his communication with Copland held Abercrombie's spirit that much closer to the ground for as long as possible.

Erskine held his post in a trio setting with bassist Marc Johnson and pianist Eliane Elias, who together offered scintillating renditions of "John's Waltz" and "Jazz Folk." Elias enchanted with her verbose soloing, backed by Erskine's masterful cymbal work, capping Johnson's heavier waves. The bassist yielded a second trio as Baron and guitarist John Scofield jumped in for "Even Steven," a nod to Solar: The Bebop Album (1984, Palo Alto) that epitomized the romantic optimism of its composer. Scofield likewise cleaved his axe into the following setup—fleshed out by saxophonist Joe Lovano, bassist Drew Gress, and drummer Adam Nussbaum—for a dip into Within A Song (2012, ECM). Being treated to such fresh takes on that return-to-roots album's "Easy Reader" and its title tune underscored Abercrombie's mature approach to syncopation, as evidenced by a sufficiently fueled rhythm section and in the controlled demolitions of Lovano and Scofield's dialoguing throughout.

Such dynamics were heighted as Gress and Nussbaum weighed in for another round amid Copland's return to the stage, now with Dave Liebman (soprano saxophone) and Randy Brecker (flugelhorn) in tow. After a tessellated rendition of "Arcade," Nussbaum gave up his chair for Billy Hart, who sat in for "Flipside." In both performances, everyone had a catharsis. Where Liebman and Brecker wavered between silences and wild expositions, Copland's soloing communicated a lyrical adoration for their dear friend. In a preliminary comment, Liebman stressed Abercrombie's tireless efforts as pedagogue (although, as he quipped, Abercrombie saw himself more as learner than teacher). In recognition of those efforts, it bears mentioning that fans and family have established the John Abercrombie Jazz Scholarship Fund (JAJSF), which provides tuition support for the next generation of jazz talent (proceeds from the concert were donated directly to the JAJSF, and anyone wishing to contribute may do so here).

Nothing was so educational, however, as the concert's final act, for which Gress, Copland, and Frisell were joined by drummer Jack DeJohnette in honor of the groundbreaking Timeless (1975, ECM). That album's title cut and "Ralph's Piano Waltz" comprised a veritable master class in give and take. In addition to the fascinations of what Frisell did with these indeed timeless melodies, the sheer patience with which DeJohnette brought up the rear allowed those of us in attendance to luxuriate in the sweep of Abercrombie's subsequent contributions. And as the quartet rekindled the flames which made that recording what it was, they drew a line of veneration to the inimitable spark that birthed them.

Emceeing this event was longtime jazz critic Nate Chinen, whose encyclopedic knowledge, passion, and anecdotal panache were the glue that held it all together. Being in the presence of those who were so comfortable in the skin of this music, I was constantly reminded that Abercrombie was never interested in untying musical knots, but rather in examining the mysterious frictions that bound those knots together, and it was all I could do to hold back tears as the full force of his legacy reinscribed itself. And while his fingers will never touch another guitar, we may take comfort in knowing that he will continue to pluck the strings of our hearts so long as we draw breath to hear them: proof that the ears are our most emotional organs. What a privilege it was to experience how those vibrations have grown with, in, and around us. DeJohnette put it best when, with a skyward glance, he offered a final benediction: "We love you, John." That we do, and always will, every time we spin a record in his memory.