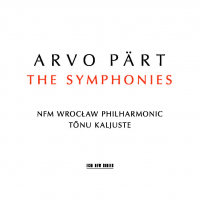 Twentieth-and twenty-first Century musical titan Arvo Pärt's career straddles both Soviet-era government artistic control and post-communism reality. Born in 1935 in Paide, Estonia, Pärt's symphonic output stands presently at four symphonies separated by and reflected in 45 years (Symphony No. 1—1964 and Symphony No.4 -2008) of turbulent history. His symphonic output in twilight, it was safe for the premiere Pärt interpreter Tõnu Kaljuste and the NFM Wrocław Philharmonic to issue a summary of the Pärt symphonic oeuvre. Conductor Kaljuste has addressed Pärt with a solemn and respectful flair previously on several ECM releases that include, In Principio (2009) and Te Deum (1993), both with the Estonian Philharmonic Chamber Choir and Tallinn Chamber Orchestra. The present survey of all of Pärt's symphonies is a singular moment, even for ECM records and its Svengali Manfred Eicher.

No matter which is considered, Pärt's symphonies are a mixture of cultural anxiety separated by moments of pastoral bliss. His first symphony, published in 1963 would appear, at first glance, the result of his studies in counterpoint with Heino Eller at the State Conservatory in Tallinn. Composed in the shade of Arnold Schoenberg's dodecaphonic (also known as twelve-tone) method of composition, Pärt's two-movement first symphony (published in 1964, while Estonia was a part of the Soviet Union) is necessarily apprehensive as it alternates frenetic brass and busy winds, winding its way into the central string-driven section. The briefer second movement emerges like an uncertain dawn, led by a single violin, whose song is punctuated by winds affording much space until a minor eruption of strings gives the section its nervous shape accented with drums and a walking bass figure. The music is sparser than Pärt's contemporary Shostakovich, revealing his minimalist tendencies.

The second symphony, published in 1966, retains the anxiety of the first symphony while eschewing the more minimalist tendencies. It is the briefest symphony: three movements of less than 5 minutes each. Pärt makes the best of this small space, ending the piece with a melodic flourish interrupted by percussive shouts. Symphony No. 3, published in 1971, is presented in its three movements, clocking in a bit longer than the second symphony. It is melodic and mournful, expressing a sense of loss and capitulation that is placed parenthetically within busier sections led by horns and winds with the support of the high strings. Something triumphant emerges in this first movement, concluding quietly in the coda. The second movement takes up the quiet with a fugue-like figure approximating fifth-century plainchant. The piece evolves into cathedral-like proportions, ending is a diminutive drum rolls. The final movement, as with the earlier symphonies, is the most melodic and accessible, again with conversational winds and strings, both stating the obvious.

Pärt waited almost 40 years to complete his cycle with his 4th Symphony (2008), titled "Los Angeles." The piece was originally composed to satisfy a commission from the Los Angeles Philharmonic Association, the Canberra International Music Festival, and the Sydney Conservatorium of Music, premiering in Los Angeles under the baton of Esa-Pekka Salonen and recorded for Deutsche Gramophone. The composer's style changed much since his previous symphony, the latter being more fully realized and considered. Pärt's deep spirituality is manifest here. This is the right time for the sympathetic Pärt conductor Tõnu Kaljuste to create this collection. The NFM Wrocław Philharmonic equals this sympathy, readily realizing and interpreting the gravity of this modern music.