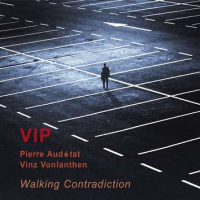 As noted on Leo Records' website, the premise for this duo set is extracted from a phrase in Martin Scorsese's classic film Taxi Driver, starring Robert De Niro. Otherwise, the duo's partly minimalist, ethereal and spacey soundscapes paint a divergent picture on a per-track basis. So, there are good-natured, yet largely probing and fractured musical contradictions throughout the program. With guitarist Vinz Vonlanthen's succinct voicings amid keyboardist Pierre Audetat's sampling duties and abstract treatments, the program also includes unwieldy EFX, meticulous inner-workings, beefy and trickling synth lines and tersely populated melodies. Toss in some herky-jerky like progressions and mini-themes that vaporize and morph into newfound vistas, this presentation tenders a bit of brain-candy for the willing listener.

"Dirty Ransom" is designed with staggered movements and Vonlanthen's nimble picking, offset by Audetat's ricocheting samples and / or keys-based EFX along with rhythmic contrasts via oddball alien dialogues, layered theme-building escapades, sullen mini-motifs and crumbling passages. The guitarist also executes gruff chord phrasings and sustain lines as the musicians seemingly broadcast the news from a distant planet. However, "Last Ultimatum" depicts a dark world with vocal chants and a geometric soundscape, tinted with Vonlanthen's volume control techniques and Audetat's bursting synth notes that once again, hint at otherworldly communications. Moreover, the keyboardist injects fractured tonal swashes and polytonal colorizations into the mix. Overall, it's a cleverly enacted set that poses newly unearthed surprises on additional listens, but not an easy-listening electronica venture by any stretch of the imagination.