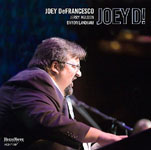 Joey DeFrancesco, who has graduated from heir-apparent to undisputed king among contemporary jazz organists, is in his element here, presiding over a trio comprised of himself, undervalued tenor saxophonist Jerry Weldon and reliable drummer Byron Landham. Rest assured DeFrancesco's nimble fingers are as virtuosic as ever, and there's no need to fret about the slender rhythm section, as DeFrancesco happily provides his own.

DeFrancesco is perfectly at ease and in control even though recording for the first time on a new Diversi DV-Duo Plus drawbar organ with "modified sound engine and modeling technology." It comes alive, as one would expect, in DeFrancesco's proficient hands, and he is squarely on his game regardless of mood or tempo. The same can be said of Weldon, an unapologetic bopper whose hard-edged tenor complements superbly the leader's more even-tempered moments. Landham, DeFrancesco's longtime companion and helpmate, is ideally cast in the role of rhythmic navigator.

DeFrancesco's choice of music is exemplary, from Miles Davis' meteoric curtain-raiser, "Dig," to the heated finale, Gene Ammons' impulsive "Blues Up and Down" (which underlines the Dexter Gordon ascendancy in Weldon's arsenal). The trio even manages to make "Take Me Out to the Ball Game" seem fresh and engaging. Completing the prismatic program are J.J. Johnson's plaintive "Lament" and the tasteful standards "If Ever I Should Lose You," "Besame Mucho," "Come Dance with Me" and "Nancy (with the Laughing Face)," the last two associated with Frank Sinatra.

This is high-quality straight-ahead contemporary jazz, a worthy successor to splendid organ trios led in years past by such giants as Jimmy Smith, Jimmy McGriff, Richard "Groove" Holmes, Jack McDuff, Don Patterson and others. DeFrancesco is the monarch now, and if Joey D! is any signpost, he harbors no desire to abdicate.

Dig; Lament; Take Me Out to the Ball Game; If Ever I Should Leave You; Besame Mucho; Come Dance with Me; Nancy (with the Laughing Face); Blues Up and Down.