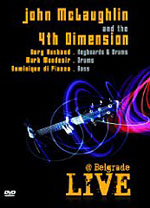 Fusion never really went away, but thanks to the efforts of two of its greatest innovators, it's been making a powerful comeback in recent years. Keyboard legend Chick Corea reunited with guitarist Al Di Meola, bassist Stanley Clarke and drummer Lenny White for a summer 2008 tour of fusion progenitor Return to Forever, that became one of the year's biggest successes, documented on the double-CD set Returns (Eagle Records, 2009). If that wasn't enough, he's followed up that tour by teaming with guitar icon John McLaughlin for a lengthy tour by their collaborative Five Peace Band quintet, beginning in the fall of 2008 and continuing through to May 2009, with another double-CD live set due out from Corea's Stretch Records on April 28, 2009.

But it was McLaughlin who kick-started things in 2007 with a fall trip around the USA and Canada, including a terrific stopover in Ottawa, Canada, a visit that represented his first electric/fusion tour of North America in nearly a decade. With his newly-formed 4th Dimension (featuring keyboardist/drummer Gary Husband, young bass phenom Hadrien Feraud and drummer Mark Mondesir), the guitarist brought new life to material dating back to Electric Dreams (Epic/Legacy, 1978) and straight through to new compositions that would appear on McLaughlin's Floating Point (Abstract Logix, 2008). That album was released in time for The 4th Dimension's May 2008 European tour and was source for the group's Live @ Belgrade concert DVD.

Thanks to a broken finger, Feraud was unable to make many of the European dates, but his replacement, Dominique di Piazza, was neither a stranger to McLaughlin, or any kind of slouch. Di Piazza and McLaughlin date back to the guitarist's Que Alegria (Verve, 1992) and, like Feraud, seemed to come out of nowhere in the mid-'80s, although he waited over 20 years to finally release his debut as a leader, the remarkable Princess Sita (Picanto, 2008). Both bassists are frighteningly adept virtuosos, though di Piazza's distinctive right-hand approach lends him even greater facility in articulating lightning-fast lines with crystalline clarity—which he does on the high-octane "Hijacked," first recorded with McLaughlin on

Husband, whose own Hotwired (Abstract Logix, 2009), with his new group Drive, is the album that should finally give him the pure jazz cred he's deserved for so long, is equally outstanding throughout the performance. A triple threat—an outstanding and increasingly distinctive keyboardist, complementing his inestimable creativity as a drummer—for which he's still better-known, though that's finally beginning to shift and balance out—and a composer of no small talent, contributing the one non-McLaughlin composition of the set, the obliquely funky "Sully"—Husband continues to grow as a keyboardist. Sonically, his textural and orchestral approach owes much to the late Joe Zawinul, while still retaining his own distinctive retro yet forward-looking sound. Harmonically, he's both sophisticated and lithe, with voicings that are an offshoot and extension of lessons learned while playing with another fusion great, guitarist Allan Holdsworth. And when he leaps between his keys and funky looking and brash sounding "jungle kit," where he works hand-in-glove with Mondesir to provide an almost unbelievable combination of visceral energy and powerful groove, as he does on the closer, McLaughlin's enduring "Mother Tongues," he turns The 4th Dimension into a rhythmic juggernaut that's difficult to equal.

Mondesir, like Husband, is a name that deserves to be better-known in jazz circles, first emerging with British saxophonist Courtney Pine in the mid-'80s. Here he matches Husband beat for beat when the two are playing their kits together, especially during the heart-racing trade-offs during "Mother Tongues," while providing an unshakable anchor for the group, whether it's the clean shuffle of Electric Dreams' gospel-tinged "The Unknown Dissident" or the far busier pulse behind the fiery "Five Peace Band."

As for McLaughlin, it's a rare opportunity to watch the guitarist delivering some pedal-to-the-metal fusion, from blinding lines articulated with nearly unequaled cleanliness to intuitive accompaniment—a skill rarely discussed when it comes to the guitarist, but one that should be, as he's equally potent as an ensemble player as he is when he's out front, center stage. His recent writing leans more to the lyrical, although when delivered at the speed McLaughlin does, it's something that can occasionally be missed. But while the theme to Floating Point's "Raju" has its share of high-velocity moments, equally it possesses passages that truly sing. McLaughlin clearly loves to push his group with relentless energy—and, at the same time, be pushed back—but his playing demonstrates a thematic focus on tracks like the balladic "Nostalgia" from Mahavishnu (Warner Bros., 1984) and Floating Point's gently funky "Maharina," performances that suggest restraint isn't a foreign term.

Recorded by Radio Television Serbia (RTS), the camerawork is exceptional, providing more than enough hands-on shots for aspiring musicians, but equally focusing on presenting Live @ Belgrade as a group affair. There may be no bonus features and only one stereo sound mix, but for those who missed seeing McLaughlin's 4th Dimension tour on either continent, or for those who wish to see documented the emergence of one of the great guitarist's strongest electric bands in recent years (it's also the first-ever video of a complete McLaughlin concert), Live @ Belgrade more than does the trick, and moreover whets the appetite for 2010, when the group will be reconvening for another round of tours in North America and Europe.