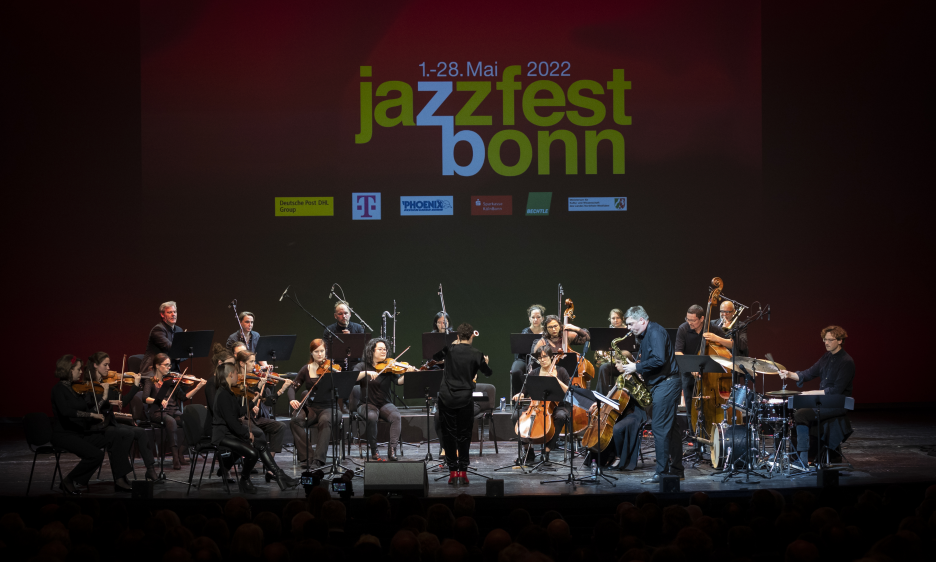 view slideshow
By Josef Woodard
May 5, 2022
Sign in to view read count

The May 1 kickoff concert of JazzFest Bonn's 12th annual edition opened at the Oper, a large theater venue nestled along the Rhine River, in overdue gala fashion. In the spotlight was a Germanic double-header featuring saxophonist-composer Niels Klein’s enticing music for jazz trio and the EOS Chamber Orchestra and a headlining set by the popular Michael Wollny piano trio, originally slated to take place in 2020.

From the vastly populous files of shuttled cultural plans during pandemic times, JazzFest Bonn also played calendar catch-up on May 1. The kickoff concert of the festival's 12th annual edition opened at the Oper, a large theater venue nestled along the Rhine River, in overdue gala fashion. In the spotlight was a Germanic double-header featuring saxophonist-composer Niels Klein's enticing music for jazz trio and the EOS Chamber Orchestra and a headlining set by the popular Michael Wollny piano trio, originally slated to take place in 2020.

That particular year in the life of this still-youngish festival, founded and run by saxophonist Peter Materna, would have been conceptually linked to the 250th birthday of Beethoven, whose connection to Bonn as birthplace and honing zone is one of this city's cultural calling cards. The Beethoven connection also accounts for a tourist appeal for a certain type of tourist (present company included, duly dazzled when I first visited the festival and city in 2018).

Generally, the opening night was a grand and celebratory evening, tinged with ruefulness concerning what we've been through. From the current vantage, the mournful aspects of Klein's set seemed somewhat reflective of COVID's ravages to spirit and flesh. Meanwhile, Wollny now enjoys a higher profile after last year's much-acclaimed album XXXX, with Wollny, Emile Parisien, Tim Lefebvre and Christian Lillinger. Time's passage puts an altered spin on realities, culturally and otherwise.

Wollny, who has been well-known in Europe for some years, but less so in America until last year's XXXX, is a tousle-haired powerhouse who brings something fresh to the jazz piano trio format. Among the points of distinction is his crafty folding in of music from the classical world, including Alban Berg, 14th century composer Guillaume de Machaut and Paul Hindemith (at one point, Wollny playfully coaxed the audience into chanting "Hindemith! Hindemith! Hindemith!" Only in Germany?)

At times, Wollny can seem a modern-day equivalent of the devilishly charismatic virtuoso model of 19th century "rock stars" Paganini and Lizst, blessed with an assured technical command, a restless spirit and desire to dazzle a crowd. A secondary but critical aspect of the group's bedazzlement factor is the remaining two-thirds of his trio since 2015—bassist Christian Weber and drummer Eric Schaefer (also a composer for the group)—integrated units in a trio which can navigating tricky-tight rhythmic structures and moments of measure free improvisation. They also specialize in building energies into raucous, crowd-lubing climaxes at the end of a "tune."

The fragmentation process can get in the way of a sense of settling into a relaxed musical space. When such moments arise, we might yearn for them to stick around for a spell. But no: Wollny's active musical mind has places to go.

Unequivocally, this trio puts on a dynamic Show (with a capital S), moving through multiple pieces and intensities in the course of extended suite-like pieces and sometimes approaching headbanger jazz status, though all-acoustic. Call it jazz for those with short attention spans and a strong appetite for regular changes ("changes" in performance activity and focus shifts, not necessarily chord changes).

An sublime and artful player and composer, Klein has braved the challenging field of bridging jazz and classical dialects. He effectively forged a cross-idiom pact with the EOS Chamber Orchestra (directed by his wife, Susanne Blumenthal), which played beautifully in the "art music" temple of the Oper. Beyond atmospheric cultural conditions, Klein's scoring and blending of a jazz trio and improvisational passage within and alongside orchestral colors made a memorable impact.

His generally softer tone and lyrically, naturally exploratory phrasing works well in this hybrid "chamber" form, whereas a brasher and more hubristic sax voice might topple the balance. At times during the set, we sensed hints and echoes of the collaboration of Claus Ogerman and Michael Brecker, an empathetic meeting of urbanely wise orchestrations and tenor saxophonist as sensitive protagonist. But in Klein's impressive three-part suite Exploring Objects and Shapes (a title which the music nicely illustrates), Klein's linguistic experiments shift into more dissonant, structurally/rhythmically complex and generally more intellectual terrain.

In the penultimate piece of the concert, Klein's "Throb" injected a yearning melody, vaguely reminiscent of film noir-flavored themes from such film sources as Jerry Goldsmith's Chinatown music and Bernard Herrmann's Taxi Driver score. But Klein's model was flecked by unsettled (and unsettling) tonally and an implied questioning embedded in the score. It seems that his is not a journey eager to coax easy resolutions or happy endings, but to provoke thought and expand on the still-evolving interlacing of jazz and the classical realm.