Home » Jazz Articles » Jazz for all Ages at Sonesta Resort 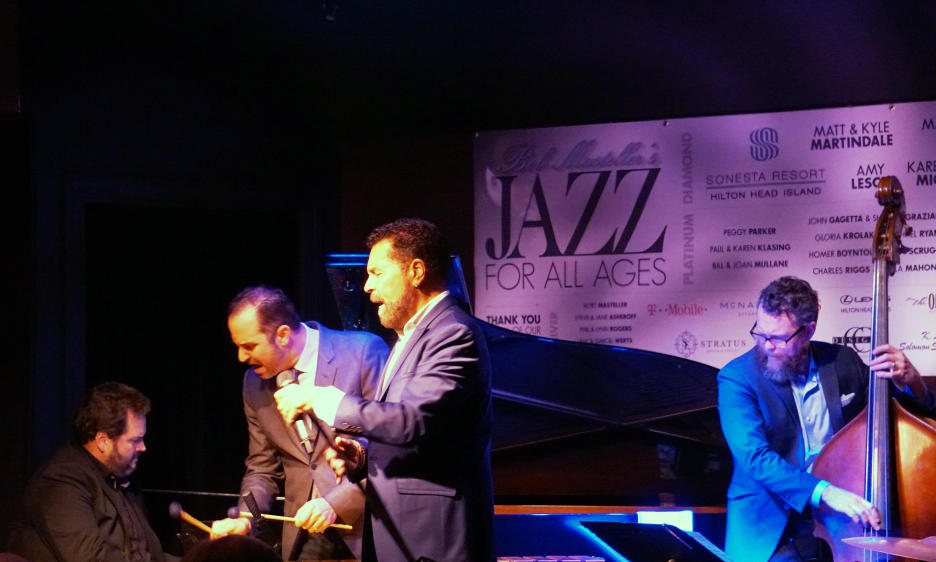 It takes a few years for a jazz festival to define its character and purpose. Now, in its fifth year, the jazz festival on Hilton Head Island, SC, has achieved both goals. The character of the festival follows the musical ethos of the local jazz club, The Jazz Corner. Whether presenting the latest bands to be formed by alumni of Julliard or Berklee schools, or featuring some of the most seasoned performers still touring, selecting the mix of music is a magical art practiced by producer and director David Masteller.

At the 2017 Festival, the headliner was Carmen Bradford, celebrating the centenary of Ella Fitzgerald, with Joe Gransden's Big Band. Having personally shared a stage with Miss Ella, Bradford brought her own talent and authentic stories from behind the scenes to this celebration of the greatest of all lady jazz singers. Even at the height of her success Miss Ella confessed her endearing timidity saying, "I am frightened they won't like me." On the second 2017 festival night, pianist and arranger Noel Freidline paired his trio with singer and film actress, Maria Howell. They performed a vibrant mix of standards and modern pieces, straying into the Beatles repertoire, which is some of Freidline's favorite ground to improvise on.

Christian Tamburr attacked the vibraphone with thrilling energy, letting the instrument soften the blows with its mellow reverb. His friend singer/songwriter Clint Holmes explained his musical credentials in his own composition "1944" accompanied by Tamburr, who had now switched to piano. A child of a sixty-year marriage begun in 1944 between an English opera singer and an American jazz singer, Holmes began performing in the Colored Musicians Club in Buffalo NY, and made his career entertaining in Las Vegas. With exquisite timing, his voice smooth as silk, Holmes delivered unexpected scat sections picked up by Billy Thornton on bass; they went to-and-fro in four measures. After Thornton's bowed bass, Holmes opened a fast scat conversation with the sensitive drums of Quentin E. Baxter, and again with the hard driving piano of Scott Giddens. Through a funky Gershwin "Summertime," to an all-instrumental Beatles "Eleanor Rigby" and on, for an elegant visit to Hoagy Carmichael's "The Nearness of You," this was a raft of technically superior music delivered with real fun and feeling, and those haunting vibes.

The depth of jazz understanding Joey Alexander has intuitively achieved comes from talent and a weight of work for which only the young have boundless capacity. With five albums and three Grammy nominations already to his credit at fifteen years of age, his mature harmonic approach truly wins him the title of prodigy. There were no teachers where Alexander was born in Indonesia. He was self-taught on an electric keyboard, guided only by recordings from his father's jazz collection. He came to live in New York on a visa issued only to individuals of extraordinary ability and quickly rose to play in the White House. Alexander opened with a dense, free improvisation on a piece called "Eclipse" which is the title of his Motema Music label album. The full-size concert Steinway piano brought out the delicate variety of shades in Alexander's touch. A piano that big threatened to engulf his slight frame, but Alexander twisted and threw his shoulders into the music until the excitement was too much for him. He jumped up and went on playing standing, delivering incredibly complicated runs. He played his compositions "Peace" then "Space" then the excellent bassist and drummer unfortunately both became overwhelming with long, loud solos. Alexander signaled the sound engineer to lower their levels, bringing balance back to the trio. They went on to play another original composition, "City Lights," and played "Sunny Waltz" for an encore. Alexander starts a composition with a rhythmic groove, immediately building on that to a melody. His improvisations feel like compositions to him, and so they are. His parents traveled with him, but refused the front table seats allocated to them, preferring to give their son space to play. The after performance jam session was a delight but by 11.30pm, Alexander confessed to being a little tired and was whisked away to his room in the host Sonesta Oceanfront hotel.

Next night, Ronnie Leigh took the stage, backed by a seven piece band. Leigh is one of those utterly reliable performers who deliver consistent quality. His group started out with a vocal version of Miles Davis' "All Blues" from the legendary "Kind of Blue" album, on to Al Jarraeu's "We're in this Love Together," Lou Rawls' "You'll never find another love like mine" and on through Soul and R+B standards to give the Blues side a popular showing, as most jazz festivals do. The arranger was David MacKenzie who played various saxophones. When later it came time for the closing jam session in the Sonesta bar, he teamed up with his boyhood friend Howard Paul, CEO of Benedetto guitars, and they tore up the bar at John Brackett's jam.

Hilton Head jazz festival started a few years earlier, when the Masteller family, owners of The Jazz Corner, saw local schools cut music budgets. They started The Junior Jazz Foundation. To date, they have refurbished hundreds of used instruments for schools and recently delivered an entire piano laboratory. Every summer, Principal James Berry holds a jazz camp, attended by over a hundred young musicians from eleven states, with a faculty of both educators and working musicians. There is a reason why schools curtailed music programs-music education is expensive. The Foundation raises funds to support school programs and college tuition. Each year, that is the purpose of The Jazz Festival on Hilton Head Island.

Why then, is a jazz festival called "Jazz for all Ages"? As well as educating young musicians, The Foundation is dedicated to preserving jazz through live performance. There is little point in educating some of the best musicians that jazz has ever seen, without also encouraging jazz appreciation in a wider audience to create demand for more clubs and more venues for them to play.