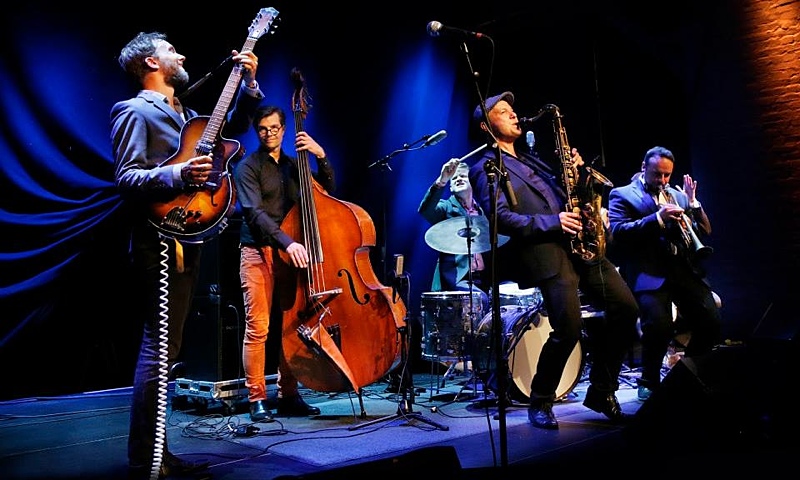 By IAN PATTERSON
October 6, 2014
Sign in to view read count

We don’t want jazz to be run by old men. We want equality and we want women’s voices to be heard. —Raisa Siivola (Finnish Jazz Federation)

When the steamship RMS Andania docked in the port of Helsinki in 1926 it unloaded more than just cargo. The American jazz group the Andania Yankees that disembarked stayed for two months and effectively kick-started jazz in the Finnish capital. Today, Finnish jazz is in rude health and it was the mission of the Finnish Jazz Federation to showcase a broad cross-section of its finest up-and-coming jazz talent to the two hundred or so jazz professionals gathered in Helsinki for the General Assembly of the European Jazz Network, which for the first time was also open to non-member professionals.

As the name suggests, the three-day Jazz Finland Festival was essentially a shop window aimed at the dozens of jazz festival directors, agents and journalists of the EJN who had come from every corner of Europe. Jazz professionals from Russia, Norway, Italy, Sweden, Hungary, The UK, Ireland, France, Rumania, Moravia, The Netherlands, Lithuania, Macedonia, Denmark, Estonia, Portugal, Turkey, Belgium, Iceland, Luxembourg, Poland, Slovenia, Slovakia, Croatia, Bosnia & Herzegovina, Belgium, Austria and Germany—all assembled for what was billed for the first time as the European Jazz Conference.

After the welcome and official opening by Annamaija Saarela, President of the EJN, the usual business of any General Assembly—a review of the year and significant developments, counting the pennies in the piggy bank and strategies for the year ahead—duly took place. But with jazz professionals also invited from Malaysia, Indonesia and Australia for a panel discussion entitled Beyond Europe there was a broader scope to the conference than networking or discussing the health of jazz within a purely European network.

Paul Augustin, Director of the Penang Island Jazz Festival, Agus Setiawan of Wartajazz from Indonesia and Joanne Kee, Artistic programmer for both the Sydney Improvised Music Association and the Sydney International Women's Jazz Festival and editor of Jazz Australia reminded all present that jazz has a history throughout Australasia almost as old as jazz itself. Significantly too, Australia and many Asian countries boast thriving jazz scenes (Indonesia has fifty three jazz festivals at time of writing) that represent healthy opportunities for cultural exchange and business.

Jazz, lest we forget or choose to ignore the fact—at our peril—is a business after all. Whilst money is unlikely the primary motivation for a young musician to pick up an instrument and tune it to a jazz frequency or for those fantastic Looney Tunes to start up jazz festivals (or jazz magazines for that matter), nothing much happens without the circulation of money. Festivals cannot run without serious capital in place, musicians struggle to tour without financial backing and CDs don't make and promote themselves.

It was a reality check to attend the European Jazz Media session, ably moderated by Cyril Moshkow—editor of Russian jazz magazine Jazz.RU—and learn of the dwindling numbers of hard-copy jazz magazines. When a top-quality magazine like Spain's Cuadernos de Jazz—founded in 1990 by Raúl Mao and María Antonia Garcí—folds as a hard copy concern in the face of the financial crisis it sends shockwaves through the international jazz media. More importantly, however, people lose their jobs.

Fourteen writers and photographers attended the session—down on previous years. Full-time professionals like Jon Newey of Jazzwise magazine fame were outnumbered by part-timers, volunteer enthusiasts and that increasingly common species—bloggers. What was encouraging, however, was the unquestioned enthusiasm for the cause and the determination to keep on bearing the standard through the battlefield. Most jazz media operates at the financial margins of the industry—a position which hardly reflects the important job that it does in promoting the musicians and their music.

Market forces, however, prevail, no matter how unpalatable that fact is for jazz professionals of all stripes. It was a slight surprise to learn therefore, that the twenty or so Finnish jazz bands that performed thirty-minute showcase concerts over the three days weren't paid. The argument, perhaps, is that with so many European festival directors in the audience, not forgetting those from Indonesia, Malaysia and Australia—as well as delegates from Japan—any musician should be happy to play for free knowing that a good performance might be the passport to performing at foreign jazz festivals. It's an argument, however, that many festivals themselves use to lure bands cheaply and one that musicians are no doubt sick of hearing.

What's In A Name?

The question of what makes a jazz festival a celebration of art was at the core of Matti Nives morning session. During an animated ninety minutes around forty attendees—mostly festival directors—shared their insights and differences of opinion on the importance of festival branding, funding and the cultural experience of festival goers.

There was clearly a division—a minor rift in fact—between those who think jazz is in robust health and those who see it as in spiraling decline. The glass half-full/half-empty viewpoint seemed to rest on the limits of the definition of jazz. It's true that if we're talking about trad jazz then we're one nail away from a sealed coffin; if, on the other hand, we're of the opinion that jazz in 2014 is less about style and more to do with an approach to music-making, then there are, as Ian Dury and the Blockheads reminded us, reasons to be cheerful: "A bit of grin and bear it, a bit of come and share it."

The crux of the problem runs deep; several jazz festival directors lamented ever having put the word jazz in the festival name due to its loaded nature and its ability to turn certain sections of society—seemingly very large ones—away from the doors. As one festival director said: "It [jazz] was the stupidest name I could ever have given my festival." The Moers Festival in Germany is one example of a festival that decided to drop the word jazz from its name. Arguably what stops many other festivals from following suit is the Arts Council funding that the very word "jazz" is often able to leverage.

The construction of the Helsinki Music Centre was initially the source of much debate and the building site was considered a major eyesore in the city centre. However, the glorious edifice that arose—open, luminous and state of the art—is now a source of civic and national pride. At a cost of $160 million it was, as somebody pointed out, at least twenty million dollars cheaper than Skyfall, the last James Bond film, which apart from an exhilarating fifteen-minute opening was largely forgettable coswallop. You can see every cent of the HMC's $160 million investment in its design.

Many of the musicians performing at the Jazz Finland Festival had passed through the centre's jazz program, which began in 1983. Bachelor and Doctorate degrees are on offer and the list of visiting artists to the HMC is a who's who of modern American and European jazz. A Junior Academy offers aspiring young jazz students tuition every other weekend and in addition, the HMC runs a summer camp for jazz students aged thirteen to fourteen.

No expense has been spared at the HMC. When the Wayne Shorter Quartet came to perform in the magnificent main concert hall, pianist Danilo Pérez was offered a range of twenty Steinway pianos from which to choose. The pursuit of musical excellence is clearly the driving force behind the HMC, which as Henk van Leeuvwen of Australia Northern Europe Liaisons pointed out, is not necessarily the case with some commercial jazz programs in Australia and North America. He suggested that "increasingly commercializing courses perhaps makes the skill level at entry point less important."

Musically, the Jazz Finland Festival was a feast, though the challenge was in digesting the quantity of music on offer. The first evening began at the downtown Koko Jazz Club, where five bands presented their wares in the Young Nordic Jazz Comets 2014. Started in 2000, the YNJC functioned as a competition until 2012, before changing to a showcase format. Over the years artists including Jazz Kamikaze, Albatrosh, Pixel and Hanna Paulsberg have all got a leg-up from the exposure afforded by the YNJC.

Norwegian power-trio Krokofant's eponymous debut on Rune Grammofon (2014) garnered rave reviews and its brand of andrenaline-pumping jazz channeled the prog-rock of King Crimson circa the grungy Earthbound (Island 1972) and punkish modernists such as Acoustic Ladyland or PELbO.

Intone, a multi-national quintet from Sweden was formed by Californian saxophonist Eric Arellano and bassist Beate Wiesinger in 2010. With four years gigging under its belt and an impressive self-titled debut album (MaRy Music, 2012), it was no surprise that the band sounded tight. Its modern, straight-ahead jazz was essentially melodic. Arellano, trumpeter Oskar Stenmark and guitarist Per Ovang all impressed as soloists but the compositional strength and coherent group identity stood out above all else.

No Country For Old Men

The youthful energy and distinctive quality of the five bands gave a glimpse into the diversity and vitality of jazz in the Nordic countries. Collaboration between the five Nordic countries through the Nordic Jazz Association has been going strong since 1999. The aims of the NJA, explained Raisa Siivola of the Finnish Jazz Federation during the main conference, are to advocate jazz, build jazz audiences, promote the music internationally and promote gender equality.