Jane Monheit & Clint Holmes At Jazz For All Ages 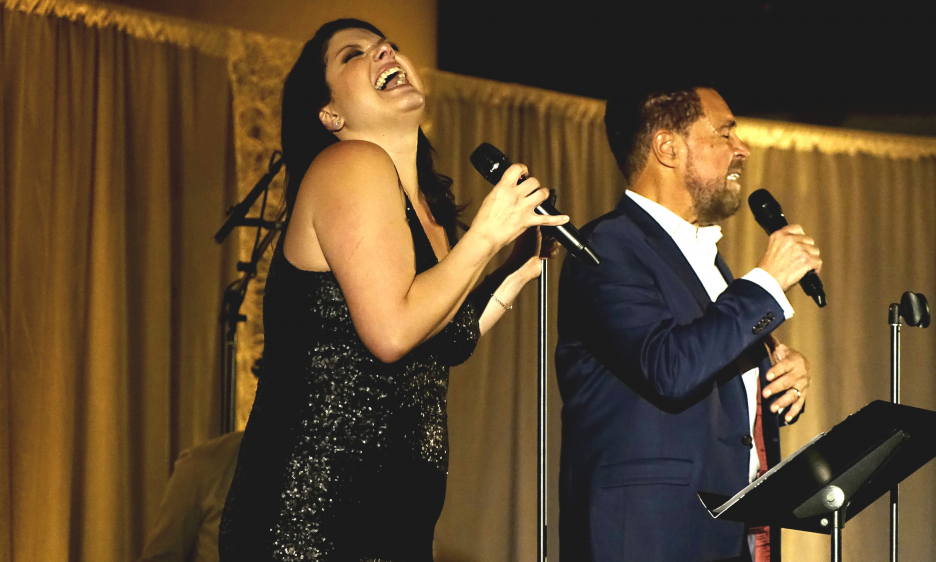 In this centennial Nat King Cole year, The Junior Jazz Foundation invited Christian Tamburr to arrange and direct the first night of music. In addition to his quartet, Tamburr asked Jane Monheit and Clint Holmes to join him in performing fourteen of the more than one hundred Cole recordings that entered the charts.

"Jazz for all Ages" was the 6th annual fundraiser performance to benefit The Junior Jazz Foundation, begun by the owners of The Jazz Corner, Lois Masteller and her late husband, Bob. To welcome guests in the lobby, Jackson Evans played his Benedetto guitar and sang, his wife Maggie played electric bass with Ricardo Ochoa on violin. Before the main performance, James Berry, the principle of the summer jazz camp led a student band for a set.

Tamburr opened with "Straighten up and Fly Right," and "Walking my baby back Home" both sung as duets by Monheit and Holmes. Next, Holmes sang alone music once accepted by security at the stage door and placed in Cole's dressing room. The composer was Eden Ahbez, an early hippie who lived under the Hollywood sign in Los Angeles. The song was "Nature Boy," which charted at #1 for two months in 1948.

On the "Sunnyside of the Street," they were joined by Dominick Farinacci on trumpet who gently squeezed notes from his horn during his solo. Holmes replied by whistling the theme through his teeth. For his fast hands solo Tamburr used two mallets racing up and down the bars on his Musser vibraphone. Monheit returned to the microphone to sing "L is for the way you look at me," while Tamburr spelled out the title "L O V E" in the air with four mallets. She continued with Hoagy Carmichael's beautiful "Stardust"—"Sometimes I wonder why I spend the lonely night / dreaming of a song / the melody haunts my reverie /, and once again I am with you."

Nat King Cole had perfect pitch, but he also had perfect diction and never misspoke a word. His exceptional clarity and phrasing delivered love songs faultlessly, sharing relaxed confidence, which gave the listener pause to consider the depth of sentiment in the lyrics.

Monheit went on with Irving Berlin's "Cheek to Cheek" from the movie Top Hat singing complicated scat sections while remaining completely in control of every note from her voice. Tamburr hammered fast on his vibes In "Cherokee" while Thornton on bass and Farinacci on trumpet played an interesting interlude on the side.

Voluptuous Ms. Monheit admitted she had never sung "Sweet Lorraine" before, then gave a beautiful rendition followed by "It's Alright with Me" in which she cut the tempo for eight bars then picked it up again in a well-practiced maneuver.

The obvious song to go out with was a smooth duet version of "Unforgettable" because that is what Nat King Cole remains. The consummate singer of love songs during the 1950s.

This was a polished, high-quality performance in the Las Vegas show style. Singers alternated, while Scott Giddens on the matte black Steinway, Billy Thornton on bass, and Colby Watkins on drums maintained gentle rhythms in keeping with the themes and era.

In the lobby of the Sonesta, Howard Paul (CEO of Benedetto Guitars) played with Stutz Wimmer on tenor saxophone to welcome guests. College students from Indiana and Atlanta returned home to Hilton Head Island to open onstage under the guidance of Kevin Bales.

For twenty years, Reggie Deas has led a six-piece band performing soul, jazz, and mo'town classic American music from the last century. This year, he decided with musical director and pianist Martin Lesch that they should expand to a 12-piece orchestra, and the audience heard their debut performance. Over time Deas has collected setlists which work, and the orchestra has been built around the core musicians from his band. Greg Whittaker played alto saxophone, Chris Russell drums, Zach Austin took lead and Tyrone Mack had the bass guitar. The sound of the orchestra came from the velvet voice of Deas himself, who also has a gift for imitation of the singers of the sixties, which he called making voices. His Louis Armstrong wet gravel voice brought "What a Wonderful World" back to life, and his Ray Charles "Georgia on my Mind" was an illusion come true.

The orchestra played a tight Glen Miller "In the Mood" swinging along. The addition of a stronger horn section with violin and cello added fullness to the sound, particularly in the soul music. Their music came from church gospel through soul and rhythm & blues with jazz inflections to Tamla and Motown of the early 1960s when JFK was President, and Dr. King was preaching to the Civil Rights movement. The Beatles were composing some future jazz standards too.

The two days of music supported the work of the Foundation in Jazz camp, hundreds of instruments refurbished and purchased for schools, bursaries for college students, and performance of excellence in jazz.