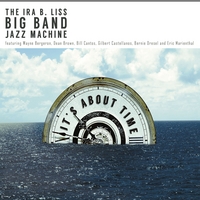 So are there any first-rate big bands worth hearing in California outside of the Los Angeles area? So happy you asked. As a matter of fact, San Diego is solidly entrenched in that position thanks to the superb Ira B. Liss Big Band Jazz Machine which, coincidentally, has recorded a spectacular new album, It's About Time. Even though the Jazz Machine is now thirty-five years old, its various working parts remain untarnished, ensuring that no mishaps or glitches arise to impair a consistently bright and exhilarating studio session.

To further underwrite its success, Liss persuaded a number of prominent friends and colleagues to lend a hand. And lend a hand they do, from guitarist Dean Brown ("The Salt Shaker," "Four on Six") to pianist Bill Cantos (his own "Go 'Way Moon"), alto saxophonist Eric Marienthal ("Sally 'O'"), percussionist Bernie Dresel ("The Salt Shaker") and trumpeters Gilbert Castellanos ("Softly as in a Morning Sunrise") and Wayne Bergeron ("Glory, Glory"). Impressive as they are, however, the Jazz Machine readily keeps pace, unleashing some powerful weapons of its own. Tenor David Castel De Oro and trombonist David Murray are exemplary on Juan Tizol's venerable "Perdido," as are tenor Steve Steinberg (the late Bob Berg's "American Gothic"), pianist Steve Sibley ("Some Other Time"), flugel Ella Steinberg ("Go 'Way Moon," Ray Brown's "The Epitome of the Ballad"), alto Dick McGuane ("Glory, Glory") and drummer Charlie McGhee ("The Salt Shaker," "Four on Six").

Even with such outstanding personnel, there are times when a lack of engaging charts can sink an enterprise. Happily, that is not the case here, as every arrangement—including five by maestro-in-residence Chris Braymen—is sharp and seductive. The Army Blues' Alan Baylock scored Wes Montgomery's "Four on Six" (on which a guitar / sax section soli recreates Montgomery's original solo) and "Morning Sunrise," trombonist Tom Garling "When the Sun Comes Out," and Mike Crotty, former chief arranger for the USAF Airmen of Note, "American Gothic." Ray Brown wrote and arranged "Epitome of the Ballad" (whose handsome solos are by Steve Steinberg, Ella Steinberg and trumpeter Randy Aviles), the late Peter Herbolzheimer "Sally 'O.'" Rob Vuono Jr. arranged "That Old Black Magic," one of the album's four vocals (by Nathan Fry). Fry duets with Janet Hammer on "Go 'Way Moon," while Hammer has center stage to herself on "Some Other Time" and Harold Arlen / Ted Koehler's "When the Sun Comes Out." "Glory, Glory," co-written by Braymen and one of the album's four dedicatees, Maynard Ferguson, requires an especially strong lead trumpet. Enter Bergeron, one of the world's foremost section supervisors, who makes sure nothing lands short of exceptional.

San Diego, it's said, is a wonderful place to visit, an opinion that can only be enhanced by the presence there of a world-class ensemble such as the Big Band Jazz Machine. If the local Chamber of Commerce hasn't bought into that, It's About Time it did.

Perdido; American Gothic; Some Other Time; The Salt Shaker; Go ‘Way Moon; Four on Six; Sally “O”; That Old Black Magic; The Epitome of the Ballad; Softly as in a Morning Sunrise; When the Sun Comes Out; Glory, Glory.