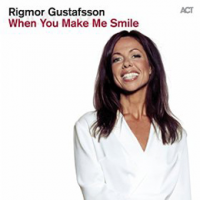 Rigmor Gustaffson's extensive discography, stretching back to 1997, has seen the Swedish vocalist working with major jazz musicians such as Jacky Terrasson and Eric Harland. When You Make Me Smile is her sixth album on the ACT Music label—all of which have included "You" in the title. Gustafsson is a subtle vocalist—no over-the-top melodrama or blues hollerin' here—and this is a polished collection of songs.

The album title and its cover photo of a smiling Gustafsson hint strongly at an upbeat, if sentimental, collection of pop-jazz songs. There's certainly plenty of examples—"A Different Kind," "Blind As A Bat" and "Forget About The Moonlight" to name just three—but Gustafsson also adds a couple of bluesy numbers and one or two slow, sad, songs. It all adds up to a collection with a wider stylistic and emotional range than the title and photo suggest.

With the exception of Marvin Hamlisch and Carole Bayer Sager's "Nobody Does It Better" this is a set of original songs. Gustafsson provides the music to most of them, with lyrics by Tomas Bäcklund and Ollie Olson. Gustafsson's regular working trio—Jonas Ostholm on piano, Martin Höper on bass and Jonas Holgersson on drums—form a sympathetic musical center for these songs, aided and abetted by a strong set of guest players.

Sweden's Dalasinfoniettan features on some of the songs, its appearances giving a lush romanticism to "Forget About The Moonlight" and "If Dreams Are Made Of Sand." Sweeping strings also suit the sadness of "Let It Go," a duet with Eagle-Eye Cherry (son of Don Cherry) and of "Hymn." The Dalasinfoniettan's contribution to "Nobody Does It Better," by contrast, is a little too lush—Östholm, Höper and Holgersson all make considered and sympathetic contributions that get rather overwhelmed by the orchestra.

The lovely waltz-time ballad "Call Me Lonely" and the slinky bossa nova of "When You Make Me Smile" (which features Magnus Lindgren's flute solo) have an immediate and lasting impact. So, too, do two songs with a small band accompaniment. "I Get Along" is a soulful blues enlivened by Jesper Nordenström's atmospheric organ playing. "Woke Up On Sunday [In Saturday's Shoes]" is another blues, but this time there's a bit more of an edge, lyrically and musically. Bäcklund's lyrics tell the tale of a lost weekend, the protagonist "still wearing Friday night's clothes." Holgersson and Höper keep things funky, as does guitarist Max Schultz, and Lindgren makes another welcome appearance, this time on clarinet.

Call Me Lonely; Forget About The Moonlight; A Different Kind; If Dreams Are Made Of Sand; When You Make Me Smile; I Get Along; Nobody Does It Better; Stay, Stay, Valentines Day; Finally, Falling In Love; Blind As A Bat; Woke Up On Sunday [In Saturday's Shoes]; Let It Go; Hymn.