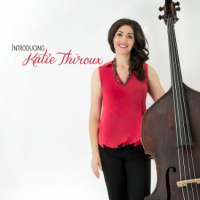 West Coast native and Berklee College of Music product Katie Thiroux possesses an embarrassment of talent riches. She is an accomplished bassist, vocalist, composer and band leader. Her debut recording, appropriately named Introducing Katie Thiroux, is precociously assertive, filling in every nook and cranny of the middle-of-the-road mainstream jazz.

Thiroux employs a cleverly conceived quartet with guitarist Graham Dechter and drummer Matt Witek. Tenor saxophonist Roger Neumann rounds out the band, providing a full-throated sound from the Scott Hamilton—Harry Allen school melody tenor. The sum of these musicians is an uncomplicated sound that is both spacious and intimate. One could walk around within these performances. Thiroux's voice is well-rounded and devoid of eccentricity. "There's A Small Hotel" and "Don't be On the Outside" reveal her capable of sweetness and grit when necessary.

Thiroux's bass playing is superlative, reflecting her admiration of Ray Brown to whom she pays homage on the original composition "Ray's Kicks." Her soloing summons the spirit of that great musician. She can swing the blues as Brown could. "RoseBird," another original channels Earl Hines "Rosetta" and Charlie Parker's "Yardbird Suite." Neumann's fully informed tenor playing pulls out all of the stops on this bop piece, swinging hard enough to demand attention. Introducing Katie Thiroux is a grand introduction to an up-and-coming talent we should hope to hear much more from in the future.

There's A Small Hotel; Don't Be On The Outside; A Beautiful Friendship; Wives And Lovers; I'm Old Fashioned; Ray's Kicks; The One I Love (Belongs To Somebody Else); Rosebird; Can't We Just Pretend; Shin Stockings; Oh What A Beautiful Morning.