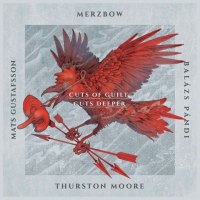 The Cuts Quartet is a sort of assembled supergroup. But we are not talking Traveling Wilburys or Audioslave here. Groups where the sum is certainly less than the parts. No, the amalgam of Japanese noise artist Merzbow (aka Masami Akita), Swedish saxophonist Mats Gustafsson (Fire! Orchestra, The Thing), American guitarist Thurston Moore (Sonic Youth), and Hungarian drummer Balázs Pándi (Metallic Taste of Blood) comes at the ears more like John Coltrane's Ascension (Impulse!, 1965) or Ornette Coleman's Free Jazz (Atlantic, 1961).

Like those seminal recordings, it is possible to get lost in the four lengthy tracks spread over 2 discs (both LP and CD). Lost, both purposely and unexpectedly.

Noise has been incorporated into improvised music to great effect. Wolf Eyes recorded with Anthony Braxton, and Merzbow has worked with Jamie Saft, Richard Pinhas, and Elliott Sharp, as well as each of the musicians here. The previous trio recording, Cuts (RareNoise, 2013) with Merzbow, Gustafsson and Pándi was a bit of a revelation. Propelling noise with a drummer's pulse opens new avenues for its reception. By adding Moore's additional guitar, the road expands into a spacious boulevard. Pándi's drumming recalls that of Charles Hayward from Massacre or Ted Epstein from Blind Idiot God. He has the ability to draw from micro to the macro, always the impetus here.

It's not that Gustafsson, Moore, and Akita need assistance. Each player can dominate as a solo performer. It's just that each player dials back their extroverted nature in service of the music. Gustafsson eschews his luxury liner baritone sax for electronics for lengthy periods, Moore often adopts silence, and Akita's wall of sound (noise) doesn't inundate. That said, the music is fierce, passionate, and intense. Like Coltrane's Ascension or Coleman's Free Jazz listeners can absorb the whole or focus on a player by following an individual through each piece. That way there is a choice between maelstrom and well, melody.

Replaced By Shame, Only Two Left; Divided By Steel, Falling Gracefully; Too Late, Too Sharp - It Is Over; All His Teeth In Hand, Asking Her Once More.