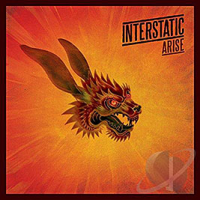 Its beginnings may have been a little closer to the jazz side of the jazz-rock equation with Anthem (PVY Records, 2011), but British expat keyboardist Roy Powell's and trio with Norwegian guitarist Jacob Young and drummer Jarle Vespestad has, since changing its moniker to InterStatic with the release of its first album on UK's RareNoiseRecords label, InterStatic (2012), ratcheted up the energy, the volume and the rock quotient. If InterStatic was the trio's first shot across the bow, then Arise is InterStatic's true statement of intent.

The trio continues to explore the space first innovated by drummer Tony Williams in his late '60s/early '70s Lifetime band with organist Larry Young and newly emigrated guitar legend-in-the-making, John McLaughlin, but just like fellow Nords Elephant9, InterStatic has far more up its sleeve. While Lifetime's Emergency! (Polydor, 1969) is a clear precedent and inspiration for InterStatic and Arise, it's far from the only one; if Lifetime's record was a dense, jagged and jumbled affair that never got off the ground as it deserved, InterStatic uses far cleaner lines and crisper delineations to make music that sometimes swings and sometimes rocks but is always delivered with 120% energy and commitment.

Arise is bookended by two versions of the rocking, anthemic "Doozy Mugwump Blues," two of three tracks contributed by Young to Powell's six along with the more aggro-toned "In the Beginning." From the gritty opening guitar chords, and Vespestad's four-on-the-floor bass drum and near-military march snare drum support, "Doozy" is so diametrically opposed to the music Young has been making for ECM—from 2004's Evening Falls through to Forever Young, released earlier this year—as to almost suggest a completely different guitarist, though Young's recent ECM date did demonstrate a simmering hint of the more searing capabilities that define his work with InterStatic.

Powell's episodic "Frank'll Fix It"—at times a two-chord wonder that rocks righteously but elsewhere something altogether knottier and more idiosyncratic—may be eminently less hummable than "Doozy," but is nevertheless an even more captivating listen. Its harsher extremes, with Vespestad's thundering kit and a breathtaking central line—played in unison by Powell and the positively grunge-toned Young—demonstrates, in a just a single bar, InterStatic's staggering virtuosity. It's a rare, explicit example of an undercurrent that is rarely used as anything more than a means to a more decidedly collective end.

Vespestad is always the perfect accompanist for any context—from his early groundbreaking days with noise improv unit Supersilent and more muscular work with Farmers Market, heard most recently on the stellar Slav to the Rhythm (Division, 2012), to the paradoxically whisper-quiet quality of his work with pianist Tord Gustavsen, seen just a month ago at the Festival International de Jazz de Montréal—and he's no less ideal here. Whether effortlessly shifting meters on Powell's jagged "Caerbannong," the keyboardist soloing on an uncredited synth with bubbling and burbling electro-sonics, or swinging with fierce intensity on "Alpha Dog," where Young delivers an incendiary solo, making crystal clear that his undeniably fine ECM recordings are but one aspect of a much broader purview, Vespestad is InterStatic's foundation and the glue that keeps it all together He even references the influential Jon Christensen's delicate cymbal work on Powell's "Iwato," were Young's soaring guitar and Powell's dark chords suggest another InterStatic touchstone in Terje Rypdal's classic Descendre (ECM, 1980).

But reference points only serve to contextualize the music of a trio that has, increasingly, asserted its own voice in the three years since Anthem, honing it even further with regular gigs at Oslo's small but wonderfully funky Sound of Mu. As InterStatic continues to evolve a jazz of the most progressive kind, Arise is, perhaps, a call-to-arms for those who've not yet acquainted themselves with this freewheeling, high octane trio. A group that seems to gain strength and resolve with each recording, if Arise is any indication, the future for InterStatic is filled with even greater promise and possibilities.