Sandviken Big Band: In the Name of Freedom 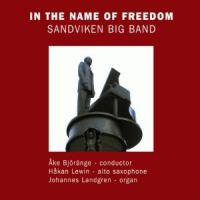 This admirably performed two-CD set by Sweden's celebrated Sandviken Big Band, recorded live in 2009 and comprised for the most part of music composed by Duke Ellington and Billy Strayhorn, isn't without its ambiguous aspects. First, there's the title: while anyone who produces an album is free to assign any name that seems appropriate, In the Name of Freedom is indeed puzzling, as it appears to have little if anything to do with what is being presented (and no explanation is offered). Second, as their combined playing time is only 77 minutes, the two discs could have easily been pared down to one with a few minutes to spare.

Be that as it may, it should be noted from the outset that the music itself, even though undoubtedly well-known to countless jazz fans here and abroad, is of the highest quality, and that the SBB, 41 years young when these concerts were presented, is at the top of its game throughout, inspired by the singular talents of guest artists Hakan Lewin (alto sax) and Johannes Landgren (organ), who served in 2005 as co-founders of the organization Music Against Violence. The concerts themselves were related to a project called "Research Through Interpretation" at Sweden's Goteborg University.

Ellington wrote half of the eight numbers on Disc One, Strayhorn three. The other is Kenny Graham's "Sunday." Disc Two contains only five tracks, two by Ellington ("Black and Tan Fantasy," "Cottontail"), Strayhorn's "Chelsea Bridge," Mercer Ellington's "Things Ain't What They Used to Be," and Juan Tizol's well-traveled "Caravan." Lewin fashions every alto solo save one, on Rob McConnell's breezy arrangement of "Things Ain't What They Used to Be," which finds alto Patric Engelbert soloing with pianist Niklas Bjarnehall and guitarist Goran Berencreutz. Lewin arranged the lyrical "Black and Tan Fantasy," co-arranged "Caravan" with Leif Hallden and "Sunday" with Landgren (who doesn't improvise in the usual sense of the word but uses the organ as a robust counterweight to the ensemble, implanting a few measures of "My Funny Valentine" into "Caravan"). Disc One's highlights include Ellington's "It Don't Mean a Thing," "Satin Doll," and "Mood Indigo" and Strayhorn's "Day Dream," "Lotus Blossom," and "UMMG" (Upper Manhattan Medical Group).

Enlivened no doubt by Lewin's fiery solos, Sandviken responds with a first-rate performance, ably supervised by conductor Ake Bjorange. An appetizing banquet for the many fans of Ellington and Strayhorn.