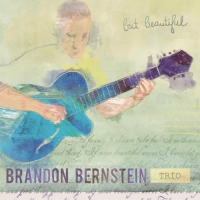 Sensitive, serious and sincere are the adjectives that bass veteran Putter Smith uses to describe guitarist Brandon Bernstein, and those simple words prove to be descriptive bull's eyes. Bernstein started on guitar at fourteen, scored a scholarship from the Berklee School of Music at eighteen, and proceeded to wrack up a series of degrees—culminating in a doctorate in Jazz Performance from the University of Southern California. These days, he's working his way through the Los Angeles jazz scene and sharing his hard-earned knowledge with up-and-comers, working as an adjunct professor at several area colleges.

On But Beautiful, Bernstein delivers a platter of pleasing standards with some help from Smith and drummer Kendall Kay—the other two-thirds of pianist Alan Broadbent's acclaimed trio. Together, these three men travel through calm country, exploring standard terrain with a light and deft touch. Bernstein and his band mates, both together and individually, excel in the art of relaxed creativity throughout.

Of the ten songs on the program, only Bud Powell's "Celia" and Warne Marsh's "Background Music" cook; the rest of the material is mellow gold. Bernstein seduces with subtlety, winning over the ears with his gentle touch and charm. He proves more than capable of delivering standards at face value, but his best work involves small stylistic tweaks on the original templates. Giving "Skylark" a steady rhythmic backbone, for example, allows the piece to walk in new ways, and presenting "My Old Flame" in five puts a new slant on an old tune.

Bernstein fancies himself an Ed Bickert and Jim Hall acolyte, and his recorded work certainly reflects those influences. Bernstein has a lot going for him, and But Beautiful bears that out.

That Old Feeling; Skylark; You Go To My Head; Nancy With The Laughing Face; I Should Care; Celia; My Old Flame; I'll Be Seeing You; Background Music; But Beautiful.