Home » Jazz Articles » In Memoriam: Jazz Musicians Who Passed in 2019 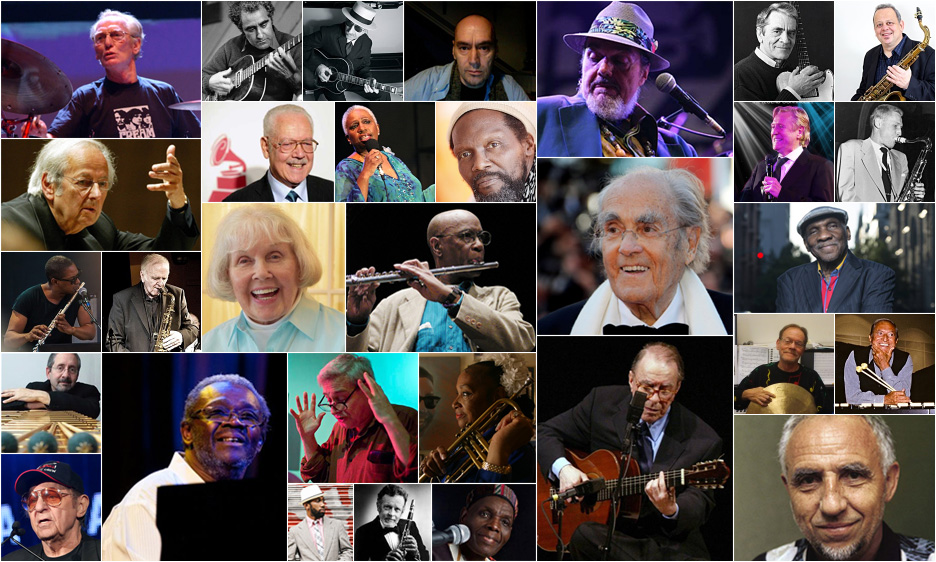 By Maxim Micheliov
December 31, 2019
Sign in to view read count
In Memoriam: Jazz Musicians Who Passed in 2019

As 2019 comes to a close, we wanted to take a moment to remember the extraordinarily gifted musicians who made an indelible mark on jazz. With sadness, we bid farewell to Joao Gilberto, Doris Day, Andre Previn, Michel Legrand, Ginger Baker, Steve Dalachinsky, Jacques Loussier, Joseph Jarman, Vic Juris, and Jack Sheldon.

Joseph Jarman was an American jazz musician, composer, and Shinshu Buddhist priest. He was one of the first members of the Association for the Advancement of Creative Musicians and a member of the Art Ensemble of Chicago.

Baltimore native Ethel Ennis was a national treasure. Critics hailed her as "the most accomplished singer performing today." That stature was earned by her magnificent voice, her brilliant compositions, her joyful performances and her collaboration with the finest musicians.

Oliver "Tuku" Mtukudzi was a Zimbabwean musician, businessman, philanthropist, human rights activist and UNICEF Goodwill Ambassador for Southern Africa Region. Tuku was considered to have been Zimbabwe's most renowned and internationally recognized cultural icon of all time.

Michel Jean Legrand was a French musical composer, arranger, conductor, and jazz pianist. Legrand was a prolific composer, having written over 200 film and television scores, in addition to many songs.

Kofi Burbridge was an American keyboardist and flautist of the blues and blues rock group Tedeschi Trucks Band.

André George Previn KBE was a German-American pianist, composer, arranger, and conductor. His career was three-pronged. Starting by arranging and composing Hollywood film scores for Metro-Goldwyn-Mayer, Previn was involved in the music for over 50 films over his entire career.

Canadian Jazz Guitarist Edward Isaac "Ed" Bickert established himself as one of the top (if not the top) Toronto studio and jazz guitarist in the 60's. He was fortunate enough to play with touring US jazz-men that came through Toronto and were willing to use the "house" rhythm section.

Jacques Loussier was a French pianist and composer well known for his jazz interpretations, arranged for trio, of many of the works of Johann Sebastian Bach, such as the Goldberg Variations.

Hal Blaine may well be the most prolific drummer in rock and roll history. He's certainly played on more hit records than any drummer in the rock era, including 40 #1 singles and 150 that made the Top Ten. Eight of the records he played on won Grammys for Record of the Year.

David Alan Samuels was an American vibraphone and marimba player who spent many years with the contemporary jazz group Spyro Gyra. His recordings and live performances during that period also reflect his prowess on the steelpan, a tuned percussion instrument of Trinidadian origin.

Vocalist/percussionist extraordinaire Mansur Scott, known all over New York City as a serious sage and "the jazz mayor of Harlem" is the epitome of a working jazz musician. He has been on the front lines, pushing the music forward, making it visible, boldly, and making it strongly heard throughout all of the boroughs of the city for decades.

Doris Day (born Doris Mary Anne Kappelhof) was an American actress, singer, and animal welfare activist. She began her career as a big band singer in 1939, achieving commercial success in 1945 with two No. 1 recordings, "Sentimental Journey" and "My Dreams Are Getting Better All the Time" with Les Brown & His Band of Renown. She left Brown to embark on a solo career and recorded more than 650 songs from 1947 to 1967.

Leon Redbone was a noted American guitarist and singer, known for his stylized performances of early jazz and blues songs.

Malcolm John Rebennack Jr., better known by his stage name Dr. John, was a six-time Grammy Award-winning musician and Rock & Roll Hall of Fame inductee. Known throughout the world as the embodiment of New Orleans' musical legacy, Dr. John is a true icon in American culture.

João Gilberto Prado Pereira de Oliveira, known as João Gilberto, was a Brazilian singer, songwriter, and guitarist, who was a pioneer of the musical genre of bossa nova in the late 1950s. Around the world he was often called "father of bossa nova"; in his native Brazil, he was referred to as "O Mito."

Arno Marsh was an American jazz tenor saxophonist. Born in Grand Rapids, Michigan, United States, Marsh played early on in local dance bands, then played in Woody Herman's ensemble from 1951 to 1953, where he soloed frequently on Herman's Mars Records releases.

Robert Sage Wilber was an American jazz clarinetist, saxophonist, and band leader. Although his scope covers a wide range of jazz, Wilber was a dedicated advocate of classic styles, working throughout his career to present traditional jazz pieces in a contemporary manner.

Clora Larea Bryant was an American jazz trumpeter. She performed with Dizzy Gillespie and Charlie Parker and was a member of the International Sweethearts of Rhythm.

Born in Indonesia, George Hanepen performed extensively in the San Francisco Bay Area during the height of the modern jazz movement.

Harold Mabern Jr. was an American jazz pianist and composer, principally in the hard bop, post-bop, and soul jazz fields. He is described in The Penguin Guide to Jazz Recordings as "one of the great post-bop pianists."

Lawrence Elliott Willis was an American jazz pianist and composer. He performed in a wide range of styles, including jazz fusion, Afro- Cuban jazz, bebop, and avant-garde. Willis was born in New York City.

Peter Edward "Ginger" Baker was an English drummer and a co-founder of the rock band Cream. His work in the 1960s and 1970s earned him the reputation of "rock's first superstar drummer," for a style that melded jazz and African rhythms and pioneered both jazz fusion and world music.

Raymond Santos was an American Grammy Award-winning Latin musician. He was born December 28, 1928 in New York City to Puerto Rican parents. He attended the Juilliard School of Music where he studied saxophone.

Jan Erik Kongshaug was a Norwegian sound engineer, jazz guitarist, and composer. He was particularly known for some 700 recordings for ECM Records made from 1970 onwards.

Edward Lozano Duran was an American jazz guitarist from San Francisco. He recorded often with Vince Guaraldi and was a member of the Benny Goodman orchestra during the 1970s.

Jack Sheldon was one of the Original Lions of the West Coast Sound. Jack's a premier improviser, is one of only a handful of trumpet players...