For years, Ray Santos has been one Latin Music’s best kept secrets. Not anymore. His arrangement of Beautiful Maria of My Soul for the Hollywood movie, “The Mambo Kings,” was nominated for an Academy Award in the Best Song for a Movie Category (1992). He penned the arrangements for tunes such as Perfidia and Quiereme Mucho, sung on the movie soundtrack by Linda Ronstadt. Excited by the power of the Ray Santos arrangements, she quickly contracted him to arrange and conduct the material for an album of Latin standards. The result of the Ronstadt/Santos collaboration was the release entitled Frenesi, a tour-de force production that earned the Grammy Award for Best Tropical Latin Album of the Year (1992)

This week we open our show with a bright young cat that is leading the new jazz march, Victor Gould, in our mission to showcase the best and brightest in the world of jazz. From there, we shift to an elder statesman Ahmad Jamal and to others notable players on today's scene, like Champian Fulton, Andrés ... 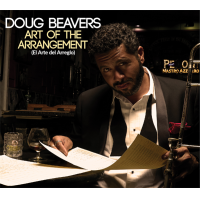 Grammy Award winner Doug Beavers has been recognized as a leading trombonist and “an arranger of the first-class.” (Harvey Siders, JazzTimes). ArtistShare is proud to submit his exciting new recording, Art of the Arrangement for this year's Grammy nomination consideration. To celebrate musical arrangement as a unique and vital art form, Beavers has enlisted a dream ...

Israel “Cachao" LopezCachao: Una MasDOC Film Institute2008 It's a cliché to say that any one man is largely responsible for a large part of modern music. But in the case of Israel &#147;Cachao" Lopez--the Cuban-born, Miami-based bassist, composer and bandleader, who died in 2007 at around the age ...

For years, Latin-jazz has been ignored or unduly dismissed as repetitive novelty music by jazz fans who should know better. While Latin-jazz is certainly foreign to those who have little knowledge of or connection with the Latin experience in America, the music's tempos and syncopation remain exceptional and worthy of scholarship. Charlie Parker and Dizzy Gillespie ...

As Latin-jazz legends go, saxophonist Ray Santos ranks high on the list. Few living Latin-jazz artists today can claim to have played in and arranged for the bands of Machito, Tito Puente and Tito Rodriguez. To give you an idea of what this trifecta means, it would be akin to a saxophonist playing in the Duke ...