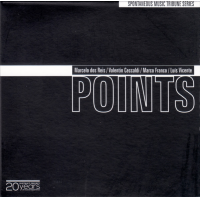 Dos Reis and Vicente, who often temper the adventure with a sort of fractured lyricism, operate further towards the extremes. Vicente revels in exploration, alternately squealing, spluttering, buzzing, moaning and whooshing, while the guitarist adopts a percussive approach on occasion, scrubbing at his instrument or bowing it to create high thin whistles. At times Ceccaldi steps into the holding role. He anchors the restless uneasy sonic carpet of "Exclamation Mark" with a twanging riff, while trumpet drifts like vapor trails over a dense clatter. Of course, that's not his only function. Later, as repeated crescendos of abraded guitar and gusty trumpet emerge, his cello careens across the soundscape before a sudden halt.

The musicians work as a unit, changing tack naturally before any passage has outstayed its welcome. By now they are so finely tuned to one another's concepts that although the relationship of the separate lines can be opaque, the overall mélange coheres. A more open feel pervades "Endpoint," in spite of a beginning assembled from scuzzy scraped guitar and an answering cello grumble, pattering trumpet key pad gurgles and Franco's shaken percussion. This is where they come closest to the ambience of previous discs, culminating in a splendid warped Americana derived from a recurring cello figure, muted trumpet sustains and accordion-inflected bowed guitar.