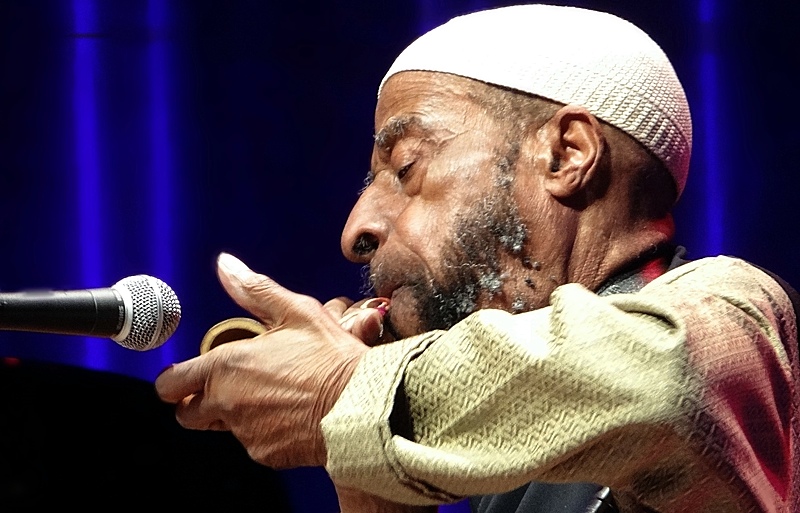 Dr. Lateef's distinctive sound came from a tenor saxophone, mystified with a big tone with blues indications. His style separated similar saxophonists during the 1940s. Playing in the bands of Lucky Millinder, and Dizzy Gillespie in 1949, he served a conventional jazz apprenticeship; however, Dr. Lateef's major impact was as a leader of unconventional musicians in 1957.

Accordingly, by experimenting with new influences, Dr. Lateef researched and became familiar with outside the Western Hemisphere; creating cross-cultural fusions for many years to come. Borrowing from Asia and the Middle East and of later decades, he flavored his music with scales, drones and percussion effects that would evolve into what is known as World Music.

During his years, he fused these elements with contemporary concert music, composing large symphonic and smaller chamber works. As he spent four years in the early 1980s studying and teaching in Nigeria, many African influences were introduced in his music.

Dr. Lateef recognized jazz as limited and degrading; therefore, he created an alternative term, "Autophysiopsychic Music"; which comes from one's spiritual, physical and emotional self. By this theory, he reinvented himself aside from the jazz mainstream in the 1980s. Due to the unequivocal melodic improvisation and rhythmic imminence, jazz resonated at the heart. No matter how far he attempted to distance his music, his compositions were consistent with many blues standards.

Born William (Evans) Emanuel Huddleston on October 9, 1920 in Chattanooga, Tennessee, he later transitioned to Islam in the late 1940s to the reformist Ahmadiyya Muslim Community; thus changing his name to Yusef Abdul Lateef. At the age of 5, his family moved to Detroit, Michigan he went on to studied saxophone at Miller High School. After spending most of the 1940s on the road as a sideman with various big bands, he returned to Detroit in 1950 to care for his ailing wife, remaining there for the next ten years.

Living in Detroit gained him high regards in local nightclubs, and as a mentor to younger musicians. He also resumed his studies in flute, oboe and composition at Wayne State University. Then recording for Atlantic, Contemporary, Impulse, Prestige, Savoy, and YAL labels ; by 1960 he settled in New York, where he worked with Cannonball Adderley, Charles Mingus, Dizzy Gillespie, Miles Davis, and Nigerian percussionist Babatunde Olatunji before forming his own quartet in 1964.

With successful albums on the Impulse and Atlantic labels, he received a bachelor's and a master's degree from the Manhattan School of Music; attaining teaching positions at Borough of Manhattan Community College in the 1970s. In 1975, Lateef earned a doctorate in education from the University of Massachusetts, Amherst. Outstandingly, his dissertation was "An Overview of Western and Islamic Education," and later taught at the University of Massachusetts and elsewhere in New England.

The more he explored, the more impressive Mr. Lateef cultivated as a composer. He recorded his seven-movement "Symphonic Blues Suite" in 1970 and his "African-American Epic Suite," a four- part work for quintet and orchestra, two decades later. His album Yusef Lateef's Little Symphony, on which he played all the instruments via overdubbing, won a Grammy Award in 1988, though not in any of the jazz or classical categories; it was named best New Age performance. Mr. Lateef said at the time that, while he was grateful for the award, he did not perceive New Age music. His latest extended works include a woodwind quintet, his Symphony No.2, and a concerto for piano and orchestra.

The National Endowment for the Arts named Dr. Lateef a Jazz Master in 2010. He remained musically active until a few months before his death. In April he appeared at Roulette in Brooklyn in a program titled "Yusef Lateef: Celebrating 75 Years of Music," performing with the percussionist Adam Rudolph and presenting the premieres of two works, one for string quartet and the other for piano.

Through his publishing company, Fana Music, Yusef Abdul Lateef contributed extensively to the glossary of performance and improvisational methodology with such works as "Yusef Lateef's Flute Book of the Blues," "A Repository of Melodic Scales and Patterns," and "123 Duets for Treble Clef Instruments."

Dr. Yusef Abdul Lateef, 93, of Shutesbury, passed away Monday, December 23, 2013, in the late morning. He passed peacefully at home survived by loved ones, his wife, Ayesha; a son, Yusef; a granddaughter, Iqbal; and several great-grandchildren. His first wife, Tahira, died before him, as did a son and a daughter.

A viewing was held Thursday, December 26, from 3 to 5:15 p.m. with Janaza prayers at 5:15 p.m. at the Douglass Funeral Home, 87 North Pleasant Street, Amherst, Massachusetts.