Susanna and Ensemble neoN: The Forester 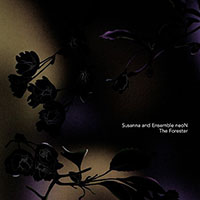 It's strange how a single event can change—or, at least, appear to change—an artist's direction, transporting it to a place previously seeming unreachable or, at the very least, unexpected. Prior to the surprise of 2012's sublime If Grief Could Wait (ECM), Norwegian singer Susanna Karolina Wallumrød was largely splitting her time. On one hand, there were solo recordings like 2009's Flower of Evil and 2007's Sonata Mix Dwarf Cosmos (both Rune Grammofon) that, running the gamut from inventive covers of Lou Reed, Sandy Denny, Black Sabbath and ABBA to deeply personal originals, were performed with groups attentive to the importance of space and silence while somehow fitting the general context of singer/songwriter. Then there was Susanna and the Magical Orchestra, her ongoing collaboration with In The Country keyboardist Morten Qvenild ("the Magical Orchestra"), again creating a blend of imaginative covers and heartfelt originals, their quirky, electro-centric pop skirting the edge of dance music while providing plenty of grist for the concert crowd on albums like 3 (Rune Grammofon, 2009).

If The Forester is any indication, If Grief Could Wait—a collaboration with Baroque harpist Giovanna Pessi, augmented by viola da gamba and nyckelharpa—was a watershed for Susanna, as she turned her back on all things electric for a program of covers by Leonard Cohen, Henry Purcell and Nick Drake, in addition to two originals that appear, in similar yet considerably different form, on The Forester. The Forester pairs Susanna with Ensemble neoN, a cross-genre, cross-cultural collective of a dozen musicians, conductors and arrangers from which smaller subsets can also be drawn, depending on the needs of the music. In the case of The Forester, since Susanna handles both duties herself, all but pianist Heloisa Amaral and singer Silje Aker Johnsen were recruited.

Susanna's own version of The Forester's three-part title track is ultimately, at sixteen minutes to If Grief's ten, considerably more developed despite interpreting the identical lyrics, but begins with the same spare melody—on piano rather than harp. Susanna doubles the melody vocally, with the ensemble slowly emerging; one significant difference is Ensemble neoN's reliance, with the exception of Solmund Nystabakk's theorbo (a long-necked lute from the 16th century), on more modern instruments including violin, cello, saxophone, clarinets, flutes and percussion. But if the instrumentation is more contemporary, the approach is of a kind, resulting in music with gently shifting colors and gloriously delicate textures, all supporting Susanna's quietly commanding voice—expressive without ever resorting to gymnastics.

Instead, throughout The Forester, Susanna delivers words that examine, in a most profound and poetic fashion, the joys and pitfalls of the human condition, her voice combining strength and vulnerability, and employing vibrato sparingly, as a device rather than a crutch. If If Grief Could Wait represented a new beginning for Susanna, The Forester further delivers on its promise, this time in a program of all-original material arranged for ensemble neoN by two of its members. Too late for inclusion in the 2013 Best Releases list, The Forester is already, as 2013 draws to a close, an early contender for one of the most impressive records of the coming year.

The Forester, I, II & III; Hangout; Oh, I Am Stuck; Intruder; Lonely Heart.