Home » Jazz Articles » Jay Clayton: In and Out of Love

Jay Clayton: In and Out of Love 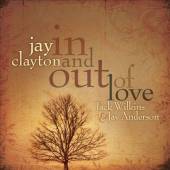 There are just a handful of women vocalists alive today who continue to inhabit the rarefied space of imaginative storytellers while continuing to be unbridled innovators. Abbey Lincoln, Sheila Jordan, Norma Winstone, Cassandra Wilson, and, of course, Jay Clayton are amongst the few continuing to enthrall audiences worldwide. Despite numerous examples of their fine sense of the art of weaving endless adventures in song, the true measure of their craft is often in their reenacting of classic songs, much as it is for great actors to attempt to play the mythical heroes and heroines of Greek drama, and live the characters created by Shakespeare and Shaw. Jay Clayton does all this and more in her superb In and Out of Love.

An inimitable presence, Clayton's technique is flawless, her intonation as special—from the luscious contralto where every phrase and line begins, to the heights of a near-falsetto that she appears to employ as naturally as a poet like Dylan Thomas might narrate his work—and seemingly effortless as mere mortals taking a breath. And if she is a Goddess, then she can also be fallibly human in love, as she falls prey to the charm of a lover and the song itself in "Falling in Love with Love" and "My One and Only Love." On "Freedom Jazz Dance" and "Sunshower," Clayton is absolutely mesmerizing, as she creates harmonies on the fly, weaving her hypnotic path in and out of scarcely familiar melodies. Her ability to make impossible vocal leaps from a sensuously husky depth to an almost shrieking high is breathtaking. A mere peep into her penchant for bebop, Clayton simply stops the heart and replaces that beat with the rhythm of the song on John Carisi and Ray Passman's "Israel."

There are two other stars on the album: guitarist Jack Wilkins and bassist Jay Anderson. Anderson shows his mastery of melodic invention while remaining absolutely in the pocket on tracks like "Falling in Love with Love" and "I Hear a Rhapsody" where his wresting the melody from Clayton during an ebullient solo is as exquisite as the manner in which he returns it to the singer. Wilkins is one of the most accomplished guitarists around, playing with such angularity as to stay on the edge, as well as, at times, creating fluid lines that seem to flow from a horn rather than a stringed instrument.

This is a quiet album, but sometimes the very quietude of artistry is apt to make a very loud noise, a concept to which Jay Clayton is no stranger with her high art.

Falling in Love with Love; How Deep is the Ocean?; Freedom Jazz Dance; My One and Only Love; Sunshower; For Heaven's Sake; Israel; Never Let Me Go; I Hear a Rhapsody; Lament.

Title: In And Out Of Love | Year Released: 2010 | Record Label: Sunnyside Records