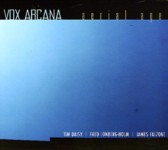 A list of influences including John Cage, Morton Feldman, Terry Riley, La Monte Young and Anthony Braxton is not the norm for a drummer-led ensemble, and gives notice that preconceptions are about to be challenged. These are the diverse inspirations Tim Daisy draws upon in Aerial Age, the sophomore offering from Vox Arcana, his vehicle exploring that ever fertile borderline between composition and improvisation. Best known for fuelling the fires of the Vandermark 5, the drummer remains a cornerstone of the fecund Chicago scene, notable for his timbral ingenuity and crisp drive, and consequently active in countless units of cross fertilization.

Daisy's writing thrives on stark juxtapositions, referencing multiple sources and solutions, often within the same piece. Breathing life into Daisy's arrangements are Vandermark 5 confrere Fred Lonberg-Holm on cello and Allos Documents label boss James Falzone on clarinet, who tackles the written lines with as much diligence as they mine the pockets marked for improvisation. Daisy spends almost as much time at the marimba as behind his stripped down but extended kit. So odd are some of his muffled and tapping textures that there would be considerable merit in a DVD to observe their genesis. Along with the leader's sundry percussive tactics, Lonberg-Holm's chameleon like facility to habituate, whether in the chamber or charnel house, makes for a wildly varied sonic palette. Falzone's mellifluous, pure-toned clarinet plays the straight man, eschewing the extremes, but negotiating switchbacks with poised nonchalance.

Countless episodic shifts negate narrative accounts. Perhaps due to all the abrupt shifts, track demarcations blur and the recital comes to resemble a continuous though fragmented suite. Contained within are some arresting moments, as on "Blue Space," where the romantic mingling of bowed strings and legato clarinet is undercut by the marimba lurching tipsily around the drawing room, or on the closing "Falling," where Falzone's smoky clarinet bestrides an off-kilter swing on the jazziest cut in the program.

Even where the structures are conventional, like the ABA form of "White Lines," the content is anything but: between the heads—which evoke a baroque unison line on speed, itself broken up by percussion interludes—is an improvisational section which rings the changes from exploratory duo to swooping trio to mysteriously clattering drum solo. Winnemac" begins with harsh cello scrapes and electronics, recalling radio interference, before giving way to an almost bluesy clarinet incantation over tumbling percussion, only for the cello and electronic storm to gradually return, sweeping all before it. Ultimately, in spite of the cutup approach, Daisy pulls off a coup in transcending his avowed influences—not by blending them into a whole, but by allowing the clashes to resonate throughout this fine album.