Peter Brotzmann / Steve Noble: I Am Here Where Are You 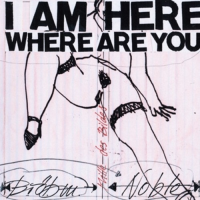 The greatest artists in history have never been able to capture the immensity of the American sequoia trees. Like the Grand Canyon, their gargantuan size cannot successfully be reduced to canvas by painters like Albert Bierstadt or Thomas Hill, nor captured on gelatin silver prints by photographers like Ansel Adams. Seeing is, indeed, believing. Just like the titanic Redwoods, experiencing the force of nature that is Peter Brötzmann is best done in person.

Thankfully, an excellent recording can succeed in recreating the aural experience. The imagination is then left to fill in the invariable lacuna.

With the success of a series of 2010 concerts with British bassist John Edwards and drummer Steve Noble, captured on ...The Worse The Better (Otoroku, 2012), the great saxophonist embarked on a brief tour with Noble. Their duo performance was captured live in Brussels, in January, 2013.

Opening with the grueling 14:38 title track, Brötzmann blows gusts of energy against the roiling turbulence of Noble's attacks. Like two prize fighters aiming for a knockout in the very first round, they pursue a determined and tenacious attack. It is not until about the halfway point that the contest cools itself into a sort of blues, the saxophonist now delivering notes not as the fire-breathing Machine Gun (FMP, 1968), but as a Ben Webster dream.

Noble's role is not so much as foil for Brötzmann as that of an accelerant. He can speed matters up or set the stage for the proceedings. His opening solo on "No Basis," an angled, off- balanced exploration of metal drum parts (cymbals, rims, and stands) and quicksilver attack on the toms, invites Brötzmann to over-blow extended lines on his clarinet. With Noble in the driver's seat the barrage takes on a more restrained approach. The same is apparent when Brötzmann picks up his taragato in response to Noble's mallets on "If Find Is Found." The drummer-as-narrator has a different storyline to follow. He coaxes his partner to extend his musing further and further out. The pair feeds off each other's energy, flexing and re-flexing, note-by-note. The short(ish) finale, "A Skin Falls Off," clocking in at just five minutes, returns to Brötzmann's signature energy jazz performance, with Noble's drumming catapulting the saxophonist into the stratosphere—perhaps the only vantage point from which to scrutinize this natural wonder.

I Am Here Where Are You; If Found Is Found; Mouth On Moth; No Basis; A Skin Falls Off.

Title: I Am Here Where Are You | Year Released: 2013 | Record Label: Trost Records