By DOUG COLLETTE
November 9, 2019
Sign in to view read count 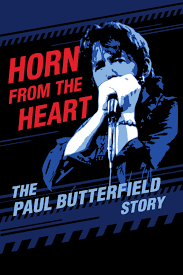 It is absolutely riveting to watch Horn From The Heart: The Paul Butterfield Story. And, likely as not, any music-loving viewer who begins will not be able to stop til the ninety-five minutes is over. Co-producers/writers/directors John Anderson and Sandra Warren tell the colorful but ultimately tragic story of the late bluesman with a precision comparable to the instrumental arrangements for his various bands. As with those, where nary a note is wasted to propel the musicianship, no scene or segment of this film is without purpose in furthering its engrossing narrative.

In this cinematic biography of the Chicago-born harpist/vocalist/bandleader, Anderson and Warren have distilled the absolute essentials of his life and placed them in just the proper context to provide due significance. For instance, it's all well and good to know that, as the song goes, Paul Butterfield was "Born In Chicago," but it is absolutely crucial to know the exact locale was the Hyde Park area of the Windy City near the epicenter of the blues on its South Side. That's where the young aspiring musician immersed himself in a vigorous scene populated by the iconic likes of Muddy Waters and Howlin' Wolf and, not only did Butterfield make himself at home, he befriended and was in turn befriended by those very men he so admired.

As Anderson and Warren dutifully and astutely point out, the reciprocal relationship yielded benefits in the short term and long, not the least of which was recognition for these influential musicians as the blues revival of the Sixties took shape, spurred in no small measure by the Butterfield Blues Band itself. The album purposely conceived and executed for that very purpose, Fathers and Sons (Chess, 1969), merely scratches the surface of a wealth of material, but, like the boundary-busting work captured on Butter and company's second studio album East-West (Elektra, 1966) and this bio-pic, it might well serve as an ideal starting point from which to proceed into exploration of a musical wellspring as broad as it is deep.

Historians will note, as these filmmakers do (and curious musiclovers should) how significant was the last minute addition of the Butterfield Band to the lineup for the 1965 Newport Folk Festival. Not only did the group's appearance add momentum to the growing movement behind the seminal genre, but members of that ensemble—guitarist Mike Bloomfield, drummer Sam Lay and bassist Jerome Arnold— accompanied Bob Dylan as he made his controversial debut with electric music; a subject of much debate then and since, echoed through interview segments with the likes of Jim Kweskin, becomes more confounding in this hindsight, precisely because similarly-styled performances, including Paul and his ensemble, were accepted as authentic and legitimate.

At this juncture in the film, there have already been more than a few enlightening interview interludes. Observations from the likes of Paul Butterfield's wife Kathy, band member guitarist Elvin Bishop and contemporaries such as Bonnie Raitt and Maria Muldaur are as entertaining as they are enlightening, capturing the exploratory nature of the times of which Butterfield remains so symbolic . In that sense, if no other, that commentary echoes content in similar documentaries, such as Martin Scorcese's 2005 work for PBS' American Masters series, No Direction Home: Bob Dylan. It is one more reaffirmation of how seamless were the most authentic and lasting musical aspirations of the era like Paul Butterfield's.

Such is the general tenor of Horn From The Heart. A generally uplifting, inspiring piece of work as it begins, like its subject, with great commitment, it remains so even as it documents the slow decline of the great musician. As Paul Butterfield proceeds with different group's of musicians through the years of the Seventies and into the Eighties, he's also dealing with the burden of a medical condition exacerbated by his own bad habits. It's to the credit of Anderson and Warren that, rather than digress one iota from their story-line via 'what if's?' and 'if only's?," they simply allow the facts of business misfortunes and the man's personal issues speak for themselves.

And rightly so, for however much this influential musician's personality might have figured into both those sequences of events (intertwined to a great degree as they were), what evolved was sad enough on its own terms to speak volumes. Just as bonus features apart from the trailer included would be redundant, there is neither sentimentality nor melodrama in The Paul Butterfield Story; the film simply does not require it to make the fundamental point that, as much as this inspiring and irascible figure deserved the recognition he received during his lifetime (and posthumously though his Band's 2015 introduction into the Rock and Roll Hall of Fame), the profundity of what he contributed to contemporary music, blues and otherwise, remains to a great degree underappreciated.

John Anderson and Sandra Warren do bountiful service to his legacy, however, with the creation, release and circulation of this film (the latter through various physical, digital and live screenings). The discerning application of a remarkable level of detail in their work even extends to the superb sound quality of the musical intervals interwoven throughout the film, the full-bodied nature of the audio is always unmistakable and perhaps never more so than at the very conclusion of Horn From The Heart as they capture the sound of Paul Butterfield on harp and vocals, late in life yet still robust and ever so soulful.