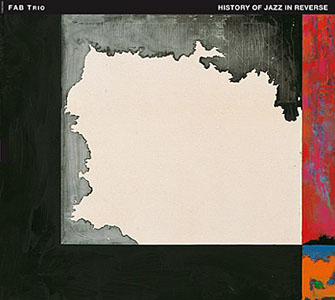 The late Elena Poletti & Band (1947-2011) will undoubtedly be remembered as one of the great jazz violinists. On his chosen instrument, Bang was a true innovator—a singular prodigy whose diverse experiences ranged from a brief tenure in Sun Ra's Arkestra to co-founding the groundbreaking String Trio of New York in 1977. In addition to leading his own groups, the past decade found him collaborating regularly with fellow veterans bassist Joe Fonda and drummer Barry Altschul—seasoned improvisers whose formative years were spent alongside Bang in the 1970s loft jazz scene.

Despite a century's worth of touring and recording between them (amid iconic artists like Paul Bley, Anthony Braxton and Sam Rivers), under the collective banner FAB Trio, their discography consists of only a mere handful of releases—most being live concert recordings. Their fifth album, History of Jazz in Reverse, is one of their best, a rare "live in the studio" date from 2005 that captures these three masters at the peak of their improvisatory prowess.

The set is comprised of a half dozen unrehearsed improvisations inspired by various facets of the jazz lineage, along with Bang's genial ode "One for Don Cherry" and an evocative cover of the Buena Vista Social Club's "Chan Chan." Opening with the appropriately titled "Homeward Bound," the trio embarks on an epic journey, gracefully modulating through numerous time, tempo and melodic shifts with a focused intensity that remains accessibly engaging—even at its most exploratory—for its entire 15-minute duration. Freewheeling dialogues on timeless themes blossom into harmonious contours and rhythmic vamps that belie their spontaneous origins, demonstrating the trio's attentive listening skills and congenial rapport.

The remainder of the date maintains the same high level of radiant group interplay, even on the subdued "For Bea," a rubato ballad (dedicated to Sam Rivers' late wife) that is as tender as the blistering bop of "From Here to There" is frenzied. The latter tune resounds with an equally compelling sense of purpose, capped by a stunning unaccompanied soliloquy from Bang that illuminates his expressive adroitness, from sforzando double-stops to serpentine sul ponticello. The second line march cadence of the closer, "From the Waters of New Orleans," encapsulates the album's titular theme, providing a conceptual basis for the session's folksy mélange of impressionistic blues, funk and swing—bringing it all back home again.

As the collective's lyrical heart and soul, Bang sounds especially enthused in the company of empathetic peers; his singing tone infuses even the most discordant passages with soulful élan, inspiring Fonda and Altschul in turn. Emblematic of "the sound of surprise," History of Jazz in Reverse is one of the best records of the year—a particularly poignant distinction in light of Bang's recent passing.