Ry Cooder launched a successful solo recording career in the early 1970s, with a string of well-received albums featuring his unique blues-flavored slide guitar. Over the years he has delved into such diverse influences as Gospel, Hawaiian slack-key, and Tex-Mex.

As a session guitarist, Cooder has worked with The Rolling Stones, Neil Young, Randy Newman, Van Morrison, and Johnny Cash. Cooder composed his first score for The Long Riders in 1980, followed by films like Southern Comfort, The Border, Streets of Fire, Crossroads, and the widely lauded Paris, Texas. In 1992, Cooder worked with Walter Hill on the gritty urban drama Trespass before re-teaming with Hill in 1993 for Geronimo: An American Legend and again in 1996 for Last Man Standing, starring Bruce Willis. Tim Robbins recruited Cooder to produce tracks with Eddie Vedder and Nusrat Fateh Ali Khan and with Johnny Cash for the critically acclaimed Dead Man Walking.

Cooder has always been something of a musical traveler, having devoted most of his career to an exploration of different areas and aspects of music. This is especially evident on albums like Paradise & Lunch, Bop Till You Drop, and Borderline.

Cooder remains one of today's most intriguing recording artists. In 1990, he joined John Hiatt, Nick Lowe, and Jim Keltner in the band Little Village, and later released the Grammy Award-winning Meeting by the River, a duo album with Vishwa Mohan Bhatt, a virtuoso guitarist from the North Indian state of Rajastan. In 1995, he won a second World Music Album Grammy for his recording Talking Timbuktu, with Malian guitarist Ali Farka Toure. He has since released his "California trilogy" of albums for Nonesuch Records: Chavez Ravine (2005), My Name Is Buddy (2007), and I, Flathead (2008).

"It's nice to have one thing feed into the other," says Cooder of his diverse career. "I do one project here and apply it over there. It's all a great education."

He was born Francisco Repilado in Siboney, Cuba, on the mountainous east side of the island and grew up in Santiago, the cradle of son. By the 1920s, he was already a fine guitar and tres player and would work in the tobacco fields and as a barber by day, before heading for the local bars by night to play with the likes of Sindo Garay and Nico Saquito. At the age of 15, he wrote "Yo Vengo Aqui," the first of hundreds of compositions. Compay also studied clarinet, and by the time he was 20, he was the clarinetist in the Municipal Band of Santiago, led by his teacher Enrique Bueno.

It was not only Compay's abundant talent that made him remarkable. He had also invented his own instrument, which he called an "armonico," also known as a "trilina." The instrument has seven strings, combining the characteristics of the conventional guitar and the Cuban tres by doubling the third (D) string. Compay used the instrument throughout his life. "I was looking for more harmony because the tres is very limited," he said.

Compay first visited Havana in 1929 but moved there in 1934 after playing in the city with Nico Saquito's Quinteto Cuban Stars. The group returned to Santiago but Compay stayed on and joined the Municipal Band of Havana. Before long, he had joined Justa Garcia's Cuarteto Hatuey and traveled to Mexico with the group in 1938.

Back in Havana the following year, he joined the Conjunto Matamaros as a clarinetist and stayed with them for 12 years. At the same time he embarked upon perhaps the most successful venture of his long career, almost by accident. One day in 1942, he was cutting Lorenzo Hierrezuelo's hair (both men came from Siboney) when one of them suggested forming a duo. They called themselves Los Compadres, and Compay recalls their 13-year association as the most enjoyable time of his career. "That was my best time of all," he says. "We added the simple things that others didn't say. People appreciated the poetry, the nature. We made no noise." It was during this period that Compay acquired his nickname: Compay was slang for Compadre and Segundo referred to his trademark bass harmony second voice.

In 1956, he formed Compay Segundo y sus Muchachos, at first as a trio and then as a quartet. With numerous personnel changes he kept the band going till his death, and his son Salvador played double bass in the group.

Ry Cooder sums up the man: "The last of the best, the oracle, the source, the one who represents where it all flows from."

Ruben Gonzalez could have been a classical pianist, or he could have been a doctor. Instead he became one of the legendary figures of Cuban music, whose piano sound has created trends and established styles for more than half a century.

Born in Santa Clara, Cuba, in 1919, Ruben graduated from the Cienfuego Conservatoire in 1934. He then went to medical school, thinking he would be a doctor by day and a musician by night. Yet the rhythms of Cuba and son in particular were in his blood. By 1941, he had abandoned his medical studies and moved to Havana to make a full-time career as a musician.

Within a year, he had joined the conjunto of the great Arsenio Rodriguez and also played with Mongo Santamaria in the Orquesta de Los Hermanos. "In the 1940s, there was a real musical life in Cuba," he recalled. "There was very little money in it, but everyone played because they really wanted to." When the Buena Vista record was release, he was the only survivor of a trio of pianists from the period, with Luis "Lili" Martinez and Peruchin, who helped shape the future sound of Cuban music, developing the mambo and embracing modern jazz harmonies. "Everything you hear now in Cuban music comes from that brilliant period," he said.

At the same time, Ruben also developed his own very distinctive style: "Arsenio said to me don't worry about what anyone else is doing. Just play your own thing and don't imitate anyone so when people hear your music they say that's Ruben."

After traveling in Panama and Argentina, where he played with tango musicians, Ruben returned to Havana and played with cabaret bands at clubs like the Tropicana, and by the early 1960s, he had teamed up with Enrique Jorrin, the creator of the cha-cha-cha. He stayed with Jorrin for 25 years, and when the band leader died in the mid 1980s, Ruben briefly took over. He did not enjoy the extra responsibility and retired soon afterwards until tempted back into the limelight with the Afro-Cuban All Stars and Ry Cooder.

"I didn't have a piano at home anymore, so when I saw the one at Egrem studio, I went straight for it, and it seemed they noticed what I did," he said. So much so that at the age of 77, Ruben was asked to record his long overdue first solo album, 43 years after he first entered a recording studio with Arsenio Rodriguez. "The greatest piano soloist I have ever heard in my life," is Ry Cooder's succinct opinion.

From a musical family, Eliades began singing and playing the guitar at the age of six. He is known affectionately as "guajiro" because he is every inch a countryman and wears an ever-present cowboy hat to prove it. By his young teens, he was playing the bars and brothels of Santiago. He had his own radio show at the age of 17 and by the 1970s was a regular attraction at the Casa de la Trova, the town's most celebrated music club.

In 1978, he took over the band Cuarteto Patria, a Santiago institution since 1940, expanding their repertoire and touring the band widely outside Cuba. Known as one of the finest guitarists of his generation, his instrument is a self-made hybrid between a guitar and the tres which has nine strings. Eliades doubles the third (D) and fourth (G) strings, with the additional strings pitched an octave higher.

Born at a social club dance, Ibrahim never looked back from that musical introduction to the world. He began singing professionally in 1941 with local Santiago groups, working wherever he could to make a living by day and singing by night. By the 1950s, he was established as the singer with Pacho Alonso's group, and he was able to concentrate on his music full-time. He began guesting with Orquesta de Chapin and Benny Moré, two of the legendary names of Cuban music. Alonso's band finally moved to Havana in 1959, and Ibrahim stayed with the group for over 20 years. By the 1970s, the group became known as Los Bocucos and pioneered the pilon rhythm, popular at the time and reputedly based on the sound of pounding the coffee beans.

At the centerpiece of the living room in Ibrahim's Old Havana apartment was an alter to Saint Lazarus or Babalu-aye, one of the African / Catholic saints of Cuba's dominant Santeria religion. A devout man, his shrine was decorated with candles, fairy lights, and fresh flowers every day. When a country-style sonero of the old school was required for the Buena Vista sessions, Ibrahim was literally plucked off the streets of Havana where he was taking his daily walk. Show less

Orlando "Cachaito" Lopez, Who Provided the Bass Line for the Buena... 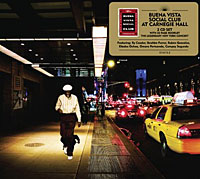 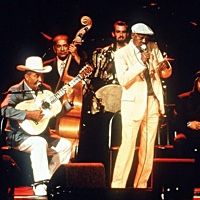 All About Jazz musician pages are maintained by musicians, publicists and trusted members like you. Interested? Tell us why you would like to improve the Buena Vista Social Club musician page.