Cuban, Latin and Caribbean Folk and Jazz is one long love story between the Spanish guitar and the African drum. From Guaguancó - practically the mother of all Cuban music—to styles such as Danzón, Bossa Nova, Cumbia and especially Són which with the influence of American Jazz in the 1920s led to the modern Bolero and later exposed throughout the world by legendary Buena Vista Social Club.

As the foundation, it is the internationally acclaimed composer and songwriter Mike Hecchi (The Sexican) on vocals, Cuban trés and Spanish guitar. Michell Boysen (Otro Mundo) who has spent a year of his conservatory time in Brazil specializing in double bass and Bo 'BoJo' Johansen (Little Havana) on percussion, who in addition to a long musical work has written books on Cuban rhythm. Theo Hjorth on piano has been taught by César ’Pupy’ Pedroso himself of the legendary Los Van Van in Cuba, and finally it is Rune Krogshede (Latin Dance Band) on trumpet. Heard as guests on the record are L.A.-based Danish jazz guitarist, Alex Olesen, Lasse Høj Jakobsen on violin and American-Cuban jazz vocalist Cassia De Mayo. The latter contributes, among other things. on the single 'Cariño Corazon' which came out last fall and got airplay in Cuban state radio.

'Liga Latina plays with a passion worthy of all Cuban music' ★★★★★ mja.dk

’First hand impression was a stormy crush. It gave me the same thrill as when I heard Buena Vista Social Club back in 1997’ ★★★★★ side33.dk

’The album is extremely well crafted – the music is as festive and sparkling like a New Year’s champagne’ // jazznyt.com

’With a great deal of respect for the great masters of Latin folk music, Liga Latina celebrates life on this tiny masterpiece’ ★★★★★ Almonde

’This is a European super group’ —A World in London, BBC Radio 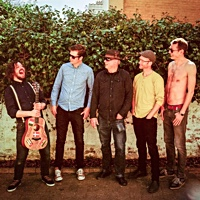 All About Jazz musician pages are maintained by musicians, publicists and trusted members like you. Interested? Tell us why you would like to improve the Liga Latina musician page.