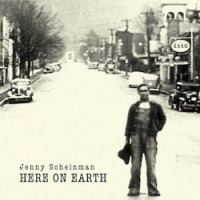 Originally commissioned as music to accompany the film Kannapolis: A Moving Portrait, but actually dating back to sources of inspiration from the artist's childhood, the music on violinist/composer Jenny Scheinman's Here On Earth stands on its own terms as an unconventional work of string music.

Fifteen tracks pass in quick succession from "A Kid Name Lily," all of which, in some proportion or another, echo the combination of melancholy and fortitude permeating the arrangement of that opener. Scheinman herself sets the tone with her violin/fiddle, and there's a fine interweaving of her instruments with the guitars from Robbie Fulks and Robbie Gjersoe as well as Danny Barnes' banjo and tuba (along with his own guitar).

In addition, Bill Frisell's electric instrument not only adds a burnished glow to the numbers on which he appears, such as "Hive of Bees," but this idiosyncratic, eclectic musician elicits the blues at the heart of Scheinman originals like "Pent Up Polly." Given Frisell's participation, there's a nagging sense that at least a few more extended recordings here would both further and deepen the mood of material like "Up On Shenanigan."

ADVERTISEMENT
In this context, however, it's a marvel that with each successive number, the musicians conjure up a mood with such alacrity, even when it's the subdued forlorn likes of the latter number. "Bark, George" is similarly wan, reaffirming the logic of the track sequencing for Here On Earth: there's a certain momentum here, even if it's not readily discernible at first and the flow becomes palpable by mid-point of the record.

In fact, in a further manifestation of the continuity, that atmosphere has all the fragility of the individual tracks. As the album hits its homestretch of its approximately forty-minute duration, the core ensemble picks up the pace with "Bug in The Honey" and the twinkling harmonics of "Annabelle And The Bird" represent the aural equivalent of loose ends being tied. Those tones become particularly resonant as that track leads directly into the somewhat more conventional bluegrass sounds of "Deck Saw, Porch Saw."

As evocative as are the photo images on the inside and outside covers of of Here On Earth, their black and white tones become something of an open canvas on which Jenny Scheinman and her accompanists paint even more vivid detailed imagery with their (largely) acoustic instruments. Their musicianship ultimately becomes a corollary to the assortment of miniature color photos adorning both sides of the insert enclosed within this CD package.

A Kid Named Lily; Rowan; Hive Of Bees; Pent Up Polly; Delinquent Bill; Up On Shenanigan; Bark, George!; Esme; The Road To Manila; Broken Pipeline; Don’t Knock Out The Old Dog’s Teeth; Bug In The Honey; Annabelle And The Bird; Deck Saw, Porch Saw; In The Honey.