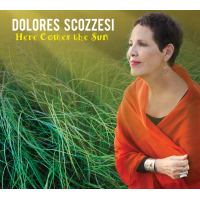 Vocalist Dolores Scozzesi is a charter member of the West Coast Jazz Gangstas that also includes Mark Winkler, Jeffery Gimble, Lauren White, Cheryl Bentyne, Sara Gazarek and others too numerous to mention. This is a creative bunch who like to support their own. Scozzesi has just released her follow-up to A Special Taste (Rhombus Records, 2010), Here Comes the Sun with Winkler at the production helm. Eight years is a long time to have to wait for a new word from an artist this fine.

Scozzesi (and Winkler) assemble a simple, yet refined combo to support her, with Quinn Johnson and Andy Langham sharing keyboard duties. The rhythm section is rounded out with bassist Lyman Medeiros and drummer-percussionist Kevin Winard. Scozzesi makes great use of Medeiros, who opens the first three selections on the disc with three disparate rhythm-tempo paradigms. The disc opens with a breakneck "It's Alright with Me" righted by Medeiros' sure time, allowing pianist Langham a nice release solo, followed by the same by Koonse. "I'm in the Mood for Love" begins with a loping bass figure that adds swagger to Scozzesi's already swaggering delivery. Langham provides a swell melodica solo. Medeiros lays down a slow blues groove that turns into as sardonic and confident a performance of Randy Newman's "You Can Leave Your Hat On." Scozzesi sings with a deliciously experienced wink in her voice.

The surprise center of the disc is a carefully crafted "Wild is the Wind" that evolves from Southern California to Buenos Aires in a mere four minutes. Scozzesi scats over a solid Latin vibe that raises the humidity to about 110%. Scozzesi weaves her way through these transitions without leaving any footprints. It is masterful. The title track is given a fast samba treatment that hosts the vocalist's equally adept samba delivery. The most fun on the disc is a salacious "Tequila" where Scozzesi purrs the lyrics with the force of a hurricane. The singer tempers the heat of "Tequila" with introspective treatments of "In My Solitude" and "Harlem Nocturne" giving the entire recital a well balanced body. Welcome back, Dolores Scozzesi!

It’s Alright with Me; I’m In The Mood For Love; You Can Leave Your Hat On; Wild is the Wind; Here Cones the Sun; In My Solitude; Tequila; A Little Taste; Harlem Nocturne.