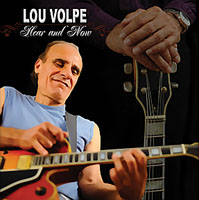 Lou Volpe is a guitarist who, in the mold of George Benson and Pat Martino has the groove down pat, but with the harmonic and melodic sensibilities to put a personal stamp on all his flights. He's worked with the likes of Chet Baker, Herbie Hancock and Roberta Flack, bringing all of that experience to Here and Now.

Comfort in his zone might imply predictability, but what Volpe does is timeless, with "Prince Charming" encapsulating what makes him special. There's an exuberance in his solo which doesn't spring purely from imposing technical command—though he has that—and there's little of the tried-and-trusted mellowness that can provoke thoughts of the same old same old.

Volpe also moves outside the customary jazz guitar colors, as he does on "Coltrane of Thought," where he proves capable of stylistically covering prime John Coltrane territory, with all the urgency that master had at his command. Pianist Onaje Allan Gumbs doesn't go with the obvious McCoy Tyner option in his solo, though; instead, he plays with an agitated elegance that marks him out in his own right.

"Blue Boppa" has a fair measure of surface sheen to it, but this is a quartet that knows how to dig deep, and it comes easily in face of the leader's tumbling streams of notes. He's a deft string manipulator, too, and this makes for subtle variations in attack. Bassist Bob Cranshaw is another gentleman with a résumé that runs to paragraphs, and here his subtle underpinning of the whole performance, particularly noticeable during Gumbs' solo, highlights just how undervalued he is.

"If You Should Leave" is a model of understated elegance, with the band thinking as one as it goes about the business of sustaining the mood. Volpe is at his most persuasively lyrical, not least because he knows how to pitch his ideas. A little double-tracking might detract from the spontaneity of the overall performance, but once it's gone, Volpe gets into his solo, which is full of ideas despite never venturing too far from the melody.

It all amounts to music that can either meld creatively into the background or reward close listening—which is often the way, when dealing with musicians who bring such substance to their work.

Astral Island; Hear and Now; Prince Charming; Coltrane of Thought; One For Wes; Live Wires; Blue Boppa; Softly As In a Morning Sunrise; If You Should Leave; Love Dance.