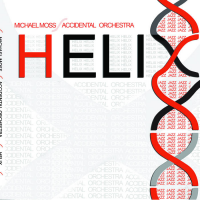 A longtime contributor to the New York jazz scene whose roots go back to Sam Rivers's loft era of the 1970s, clarinetist and composer Michael Moss has typically worked in a small-group context, especially via his most well-known ensembles, Four Rivers and the New York Free Quartet. But on Helix, he's got more ambitious goals in mind for his 22-member Accidental Orchestra, both in terms of the scope of the band and the metaphysical concept at its core: namely, "an initiation into sacred ground" through the album's centerpiece, a five-part, thirty-five-minute suite entitled "The Old One," which manages to situate large-ensemble free jazz within a variety of world sacred music idioms.

Moss has some top-tier musicians in the current creative jazz scene in his band, with violinist Jason Kao Hwang, trombonist Steve Swell, and percussionists Warren Smith and Michael Wimberly likely to be familiar to a lot of avant-garde jazz enthusiasts. And from the opening moments of "The Old One," a section called "Inception," the density and immensity of the orchestra's sound evokes the power of cosmic creation through dissonance and the diverse timbral possibilities of the instrumentation on hand. Creative percussive effects merge with the massed strings, horns and reeds to produce a glorious noise—although not in a way that allows the listener to settle into a particular musical theme, as various melodic and rhythmic fragments come and go fleetingly, somehow deriving order (just barely) from chaos.

The group has plenty of collective orchestral power, yet there are also moments for smaller assemblages within the group to find their voice, as at the end of "Inception," where saxophonists Ras Moshe Burnett and Elliot Levin get a chance to tear it up after a cacophonous burst of free-jazz groove anchored by pianist Steve Cohn, bassist Larry Roland and drummer Chuck Fertal, all of whom work with Moss in the New York Free Quartet. Tabla player Badal Roy initiates his own groove-based mood on "Bridge," the second segment, and a rich, bluesy sound is achieved on "Tree of Life," where the strings are particularly effective in giving the track a kind of avant-soul-jazz aspect. The most effective moments are to be found in the closing segment of the suite, "Mind of God," in which it is revealed that God apparently has quite a penchant for impassioned improvisation, as the group's thick tapestry of sound makes room for scintillating solos from Levin (on flute), Burnett (on soprano sax), and Moss (on clarinet).

The remainder of the album is a shorter piece, "See Sharp or Be Flat/C# or Bb," which is incidentally the inspiration behind the group's name, as it was written while Moss was recuperating from a fall over a curb. This is Moss at his jazziest, with the rhythm section in steady swing mode for most of the suite, making ample opportunities for a variety of soloists to offer their individual contributions. If it's not quite as stirring or provocative as "The Old One," it does allow the members of the group to draw from their jazz backgrounds in a convincing toe-tapping spirit. And it also showcases more of Moss's panoramic stylistic palette, with strains of Lennon and McCartney's "Norwegian Wood" and Milt Jackson's "Bags' Groove" making occasional appearances.

While it won't be accessible to everyone, Moss has a fine group of colleagues on Helix, and this challenging, heady music offers plenty of bracing energy and emotional depth for adventurous listeners.